THE WAY OF THE WORLD

Author Anuradha Roy explores love, loss and everything in between through a cathartic creative process in her latest release. 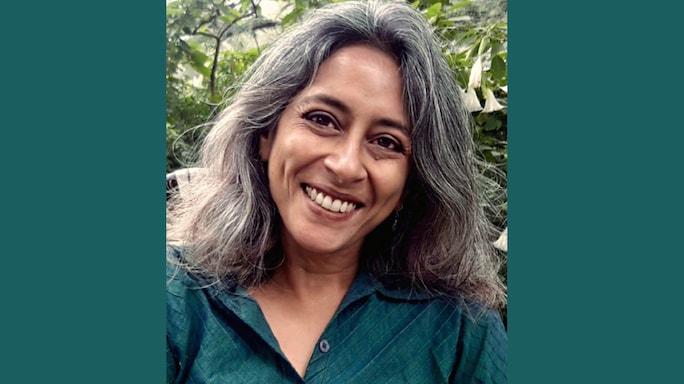 The latest novel by author Anuradha Roy, The Earth-spinner, is a marriage of her two loves: writing and pottery. Set in the past that is relatively removed from now, it deals with themes of sectarian violence and religious intolerance, rendering it deeply resonant with the world of today. The novel is a haunting investigation into grief and loss and the need for creative impulse to rise above it all. Finally, The Earthspinner is about the fragility of the free-doms to live and love the way we want.

This is your second novel with ‘Earth’ in the title. What is your relationship with Earth—the planet, and earth—the ground beneath our feet?

That’s such an unusual question. In this book, earth can be the small ball of clay in the potter’s hand that turns into a bowl, or it can be the planet itself, and its meaning expands and contracts infinitely within this span. The potter sees earth in one way, and the father,who is a geologist, thinks of it as something created over millennia. The title in Folded Earth refers explicitly to this aspect of the planet—that the Himalayas is quite literally created by the collision of one continent against another. I like this sense, in books I read or write, of a dimension beyond the human one, more mysterious, unknowable, transcending all that happens to the characters, connecting a gigantic planet with a little bit of soil from its surface.

What was the seed for this novel?An idea? A character? A theme?

The book began with the horse. I had come across clay horses in my childhood—they are made in Bankura in Bengal. Later I discovered clay horses were also made in parts of south India and when I read about the horse in Hindu mythology, I encountered a rich set of myths about a ‘submarine horse’ that roams the ocean floor. This horse and the clay ones felt connected.

The Earthspinner is, among other things, a novel about creativity and the battle to keep it alive despite all odds.Is your creative process like that of Elango, the protagonist,where you give yourself fully and madly to what you're creating?

Without the energy of obsession, there would be no audacious artistic projects and if you don’t feel obsessed, you might as well not do it at all—because then the odds will certainly defeat you. When creating his horse, Elango is up against all kinds of constraints—both quotidian, such as the availability of clay or the weather—as well as the more indefinable: Is his imagination up to the task? Does he have the strength and persistence for it? Is it worth doing at all? Will he lose heart or faith in his own idea?These are questions everyone making things—books or sculpture or pots—have to confront.

I don’t think that humans are condemned in that way, and that is not what the novel is about either. As you say, many of the characters experience grief and loss. Loss is the other side of having anything, isn’t it? I think loss, in the book, is like the water that one of the characters says forms limestone—“unnoticed in warm and calm sea-water from sediments of shells and algae that remain in it as fossils”.What I mean is that everyone is altered by loss,it changes your substance,it becomes a part of you,but you are not a prisoner to it.

Dog, horse, owl, butterfly—fauna are central in the book. What is your relationship with them?

I am fortunate enough to live on a hillside by a forest, so birds and animals are a part of my daily life. Woodpeckers, babblers, warblers, magpies, all visit to eat from the feeders I fill for them daily. They have vigorous baths in a shallow bowl of water kept for them. We use no pesticides, so it has a great deal of insect life—butterflies, hoverflies, bees and less pleasant things such as scorpions,wasps and snakes. We are slaves to four dogs who rule our home. Earthspinner is partly about the hierarchies humans establish, in which they are at the top and animals are immaterial. This is imbecilic and responsible for many of our current problems.

Nature plays a very important role in your novels, including this one. Surely the climate crisis is weighing on you?

It makes me feel as if I am watching the last act of a tragedy written by self-obsessed and greedy humankind decades ago. I would like to think there is still something we can do about the climate crisis, but honestly, I don’t think capitalist and crony interests will ever allow the kind of action that is needed. Here in the mountains, you experience the crisis every day, in the incessant rain, sudden droughts, catastrophic landslides, falling trees. There is nowhere to run or hide. We are in a car with failed brakes, hurtling down a hillside.

History and politics always play out in some way or another in your novels. How do you approach your research?

Too much song and dance is made of research when the real energy and force of fiction comes from its language, coherence, immersiveness, ideas. It's a bore to read books that wear their research too obviously, unless it is deployed with flamboyance and imagination, as in Moby Dick, for example. In my research, I try to absorb information(from books, travel, interviews) and then write as if it is lived experience. I don't want any undigested information floating around or too much knowledgetacked on just because I discovered it.

There are chilling similarities in the book with what’s going on in India today—sectarianism, lynchings, religious animosity. Is there a difference between the segregated India of today and the one you came of age in?

None of us can delude ourselves that things were peaceful, harmonious and joyful among communities and castes some decades ago—there has always been caste and religion-based violence.But the difference is that secularism and equality were something to be aspired to then. Now this dream has died.

Like Elango, you are into pottery yourself. Do your two arts—writing and pottery—inform each other?

There are any number of metaphoric parallels that can be drawn between writing and pottery. The way sludge and slop is transformed over many stages into a thing with shape, form, beauty, utility. Pottery has taught me about patience, persistence and handling failure stoically. Writing is a condition for me of being alive, and the way I decode the world for myself, but the process can be painful and complex. Making pots gives me much more immediate, sensory satisfaction. They are two completely different things and I couldn’t do without either of them.