The Mark Of Vishnu The Indian cobra with the characteristic V mark on its hood (Image for representative purposes only. Courtesy Biodiversity Heritage Library/Flickr)

"This is for Kala Nag," said Gunga Ram, pouring the milk into the saucer. "Every night I leave it outside the hole near the wall and it’s gone by the morning." "Perhaps it is the cat,"we youngsters suggested.

"Cat!" said Gunga Ram with contempt. "No cat goes near that hole. Kala Nag lives there. As long as I give him milk, he will not bite anyone in this house.You can all go about with bare feet and play where you like."

We were not having any patronage from Gunga Ram.

"You’re a stupid old Brahmin," I said. "Don’t you know snakes don’t drink milk? At least one couldn’t drink a saucerful every day. The teacher told us that a snake eats only once in several days. We saw a grass snake which had just swallowed a frog. It stuck like a blob in its throat and took several days to dissolve and go down its tail. We’ve got dozens of them in the lab, in methylated spirit. Why, last month the teacher bought one from a snake charmer which could run both ways. It had another head with a pair of eyes at the tail. You should have seen the fun when it was put in the jar. There wasn’t an empty one in the lab. So the teacher put it in one which had a Russel's viper. He caught its two ends with a pair of forceps, dropped it in the jar, and quickly put the lid on. There was an absolute storm as it went round and round in the glass, tearing the decayed viper into shreds."

It was no use arguing with Gunga Ram. He, like all good Hindus, believed in the Trinity of Brahma, Vishnu, and Shiva, the creator, preserver, and destroyer. Of these he was most devoted to Vishnu. Every morning he smeared his forehead with a V mark in sandalwood paste to honour the deity. Although a Brahmin, he was illiterate and full of superstition. To him, all life was sacred, even if it was of a serpent or scorpion or centipede. Whenever he saw one he quickly shoved it away lest we kill it. He picked up wasps we battered with our badminton rackets and tended their damaged wings. Sometimes he got stung. It never seemed to shake his faith. More dangerous the animal, the more devoted Gunga Ram was to its existence. Hence the regard for snakes; and above all, for the cobra, who was the Kala Nag.

"We will kill your Kala Nag if we see him."

"I won’t let you. It’s laid a hundred eggs and if you kill it all the eggs will become cobras and the house will be full of them. Then what will you do?"

"We’ll catch them alive and send them to Bombay. They milk them there for anti-snakebite serum. They pay two rupees for a live cobra. That makes two hundred rupees straightway."

"Your doctors must have udders. I never saw a snake have any. But don’t you dare touch this one. It is a phannyar—it is hooded. I’ve seen it. It’s three hands long. As for its hood!’ Gunga Ram opened the palms of his hands and his head swayed from side to side. ‘You should see it basking on the lawn in the sunlight."

The party burst into peals of laughter.

"Must be Gunga Ram’s eggs. We’ll soon have a hundred Gunga Rams."

Gunga Ram was squashed. It was the lot of a servant to be constantly squashed. But having the children of the household make fun of him was too much even for Gunga Ram.They were constantly belittling him with their new-fangled ideas. They never read their scriptures.

Not even what the Mahatma said about non-violence. It was just shotguns to kill birds and the jars of methylated spirit to drown snakes. Gunga Ram would stick to his faith in the sanctity of life, he would feed and protect snakes because snakes were the most vile of God’s creatures on earth. If you could love them, instead of killing them, you proved your point.

What the point was which Gunga Ram wanted to prove was not clear. He just proved it by leaving the saucerful of milk by the snake hole every night and finding it gone in the mornings. 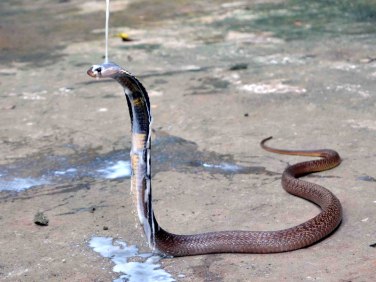 Snakes continue to be worshipped in many parts of India. Representative image.

One day we saw Kala Nag. The monsoons had burst with all their fury and it had rained in the night. The earth which had lain parched and dry under the withering heat of the summer sun was teeming with life. In little pools frogs croaked. The muddy ground was littered with crawling worms, centipedes and velvety ladybirds.

Grass had begun to show and the banana leaves glistened bright and glossy green. The rain had flooded Kala Nag’s hole. He sat in an open patch on the lawn. His shiny black hood glistened in the sunlight. He was big—almost six feet in length, and rounded and fleshy, like my wrist.

Kala Nag did not have much of a chance.The ground was slippery and all the holes and gutters were full of water. Gunga Ram was not at home to help.

Armed with long bamboo sticks, we surrounded Kala Nag before he even scented danger.When he saw us his eyes turned a fiery red and he hissed and spat on all sides. Then, like lightning Kala Nag made for the banana grove. The ground was too muddy and he slithered. He had hardly gone five yards when a stick caught him in the middle and broke his back. A volley of blows reduced him to a squishy-squashy pulp of black-and-white jelly, spattered with blood and mud. His head was still undamaged.

"Don’t damage the hood," yelled one of us. "We’ll take Kala Nag to school."

So we slid a bamboo stick under the cobra’s belly and lifted him on the end of the pole. We put him in a large biscuit tin and tied it up with string. We hid the tin under a bed.

At night I hung around Gunga Ram waiting for him to get his saucer of milk.‘Aren’t you going to take any milk for Kala Nag tonight?’

He did not want any more argument on the subject.

"He won’t need the milk any more."

"Oh, nothing. There are so many frogs about. They must taste better than your milk.You never put any sugar in it anyway."

The next morning Gunga Ram brought back the saucer with the milk still in it. He looked sullen and suspicious.

"I told you snakes like frogs better than milk."

Whilst we changed and had breakfast Gunga Ram hung around us. The school bus came and we clambered into it with the tin. As the bus started we held out the tin to Gunga Ram.

"Here’s your Kala Nag. Safe in this box. We are going to put him in spirit."

We left him standing speechless, staring at the departing bus.

There was great excitement in the school.We were a set of four brothers known for our toughness. We had proved it again.

The tin was presented to the science teacher.

It was on the teacher’s table, and we waited for him to open it and admire our kill. The teacher pretended to be indifferent and set us some problems to work on. With studied matter-of-factness he fetched his forceps and a jar with a banded Krait lying curled in muddy methylated spirit. He began to hum and untie the cord around the box.

As soon as the cord was loosened the lid flew into the air, just missing the teacher’s nose. There was Kala Nag. His eyes burnt like embers and his hood was taut and undamaged.With a loud hiss he went for the teacher’s face. The teacher pushed himself back on the chair and toppled over. He fell on the floor and stared at the cobra, petrified with fear.The boys stood up on their desks and yelled hysterically. Kala Nag surveyed the scene with his bloodshot eyes.

His forked tongue darted in and out excitedly. He spat furiously and then made a bid for freedom. He fell out of the tin on to the floor with a loud plop. His back was broken in several places and he dragged himself painfully to the door. When he got to the threshold he drew himself up once again with his hood outspread to face another danger.

Outside the classroom stood Gunga Ram with a saucer and a jug of milk. As soon as he saw Kala Nag come up he went down on his knees. He poured the milk into the saucer and placed it near the threshold. With hands folded in prayer he bowed his head to the ground craving forgiveness. In desperate fury, the cobra hissed and spat and bit Gunga Ram all over the head—then with great effort dragged himself into a gutter and wriggled out of view.

Gunga Ram collapsed with his hands covering his face. He groaned in agony. The poison blinded him instantly. Within a few minutes he turned pale and blue and froth appeared in his mouth. On his forehead were little drops of blood. These the teacher wiped with his handkerchief. Underneath was the V mark where Kala Nag had dug his fangs.

Do You Like This Story?
62
5
Other Stories
Please enter valid text
Must Reads
Latest Issue