Chittaprosad's seminal works were graphic records of the Bengal famine of 1943. 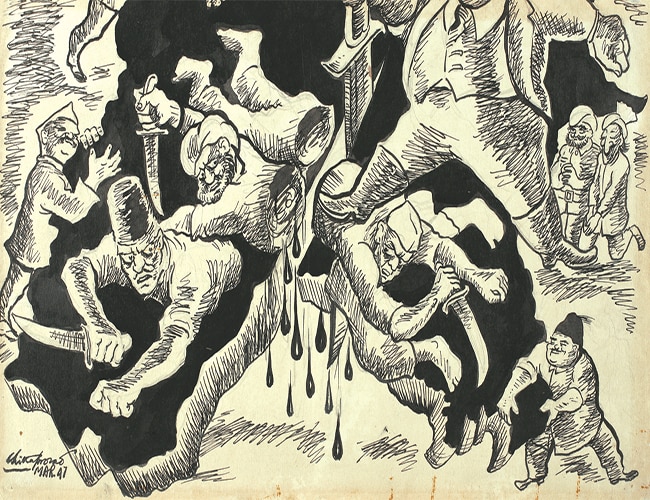 Better known by his first name (he rejected his Brahmanical last name), Chittaprosad Bhattacharya (1915-1978) was a socio-political artist with strong left leanings, whose seminal works recorded the Bengal famine of 1943 and its gut-wrenching fallout in graphic sketches and drawings.

"In my art work, I represent the tradition of moralists and political reformers. To save people means to save art itself. The activity of an artist means the active denial of death," Chittaprosad is recorded saying in the film Confession by a Czechoslovakian filmmaker. And he stayed true to his reformist beliefs, rejecting commercial success to tell a truth that was inimitably his own.

In this sketch, clearly of a pre-Partition, rioting India, we see men of purportedly different religions fighting each other for a larger share of the motherland, while a suited-booted man, seemingly representing the British Crown (face not depicted), cuts the country in half.

On display at @ DAG New York, Chittaprosad's Retrospective pays homage to the only artist to document major events in Indian history and politics.