The Freedom In Being Someone Else 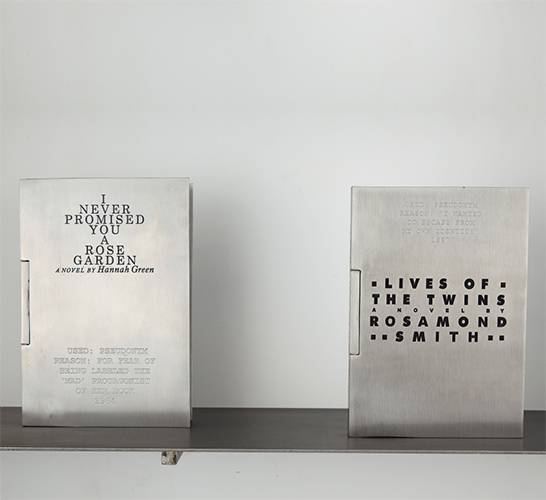 Someone Else: A library of 100 books written anonymously or under pseudonyms, by Shilpa Gupta. Etched in stainless steel, 192 x 8.5 x 72 inches (2011). Image courtesy: Shilpa Gupta.

Shilpa Gupta is a conceptual artist best known for mixing of media with technology, to create art that is evocative and unique. She studied sculpture at J. J. School of Art. 'Someone Else', an ongoing project since 2011, is a sculptural installation of a library of 100 book covers, engraved in stainless steel, kept on shelves, resting against the wall. The books represented here have one thing in common: They have all been written anonymously or under pen names over the past two centuries. "There are a hundred different reasons why writers, after having laboured over their books for months or even years, chose to publish it as someone else," explains the artist. Be it to hide their gender, avoid persecution, escape censorship and social discrimination, or to write in an unconventional language, put on a persona or publish a rejected work, writers have sought freedom in being someone else. On display are books by writers like Joyce Carol Oates (Rosamond Smith), Hermann Hesse (Emil Sinclair), Emily Brönte (Ellis Bell) and Robert Galbraith (J. K. Rowling), with the reason etched on the book cover and spine.