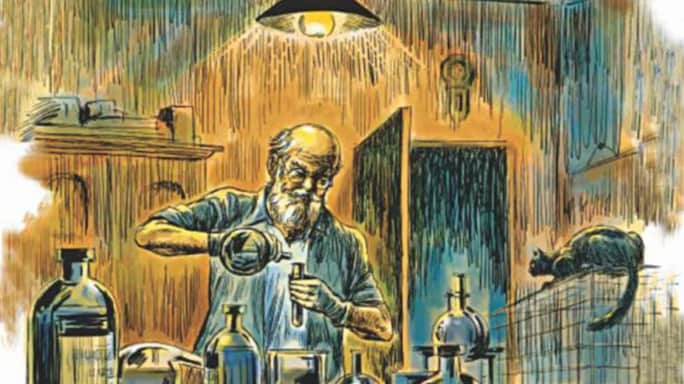 What a delightful day! After one-and-a-half years of relentless hard work, we have finally finished all our work on our device. Though the entire idea was mine, I’m using the word ‘we’ because by no means could I have accomplished this task on my own. My Giridih laboratory cannot provide the necessary material to build this machine. Therefore, right at the initial stage, I had written a letter to my German friend, Wilhelm Crole, who in turn wrote to the well-known Psychic Research Institute in Munich, Germany. Thanks to Crole’s recommendation, we received a grant in financial aid from the institute and it became possible for two Germans and one Indian scientist to create this machine in Munich. The second German is a young fellow, one Rudolph Heine. He has an insatiable curiosity about spiritualism.

Now, let me say a few words about the machine we invented. We have called it Compudium. That is, computerized medium. Those who connect with departed souls in a séance often take the help of a medium, an individual through whom the spirit communicates with this world with ease. Spiritual mediums possess a special quality. I have come in contact with many mediums in my country and have studied them carefully. There is something special about them. They are sensitive, sharp, emotional and always preoccupied or absorbed. They often suffer from indispositions and many die young. Before we completed this machine, both Crole in Europe and I in India studied the characteristics and behaviour of at least 350 mediums in detail. Our sole mission was to set up a mechanical and artificial medium to establish contact with the spirit world in place of a real live medium. Thanks to the generous endowment from the Psychic Research Institute, there was no stopping us in our quest. The results our Compudium has yielded so far confirms that our joint effort is nothing but a grand success.

The machine need not have resembled a human but we decided to give it the shape of a body and add a head to it; we have also added a pair of legs to make it stand. The equipment is a metre in height. We have created a slit on top of the head to insert the name and details about the spirit one is going to call upon. This equipment will be placed on one side of the room and the people taking part in the séance will be seated about two metres away facing the machine. After inserting the card in the machine, the lights are switched off. In this pitch-dark, a red light fixed in the machine’s chest will gradually come on, indicating that the spirit has arrived.

Now we start asking questions and the answers begin to emerge from the mouth of the machine. When the spirit begins to feel tired, the red light will gradually fade out and the séance session will come to an end. The three of us have tried out our tests on this machine. Adolf Hitler’s spirit was called. Within a minute of inserting information about him, the red light glowed.

I asked him in German, “Are you Adolf Hitler?”

The reply was “Ja”, which means yes in German.

Crole asked a second question: “Don’t you have any regret or remorse for torturing and killing the Jews so ruthlessly during your lifetime?”

Immediately, a shrill voice came out in the form of a reply from the machine, “Nein, nein, nein,” that is: “No, No, No”. This encounter went on for about five minutes.

This experiment proved two things: One, that it worked! And two, that it was clear that Hitler’s opinion of himself had not changed even in death.

We will take a break for two days and then resume our work on the machine. Heine’s aspirations are very high. He thinks if we can further fine-tune the machine we can even see the image of the spirit. In other words, the spirits will appear before us in person.

That would be very useful, an added bonus; my latest invention has already reached a state which is definitely quite unprecedented in the history of science.

Now we need to select a few scientists and invite them over for a demonstration of this machine. So far, the news of the invention is yet to reach the public.

At Crole’s request, I’ll stay back in Munich for another month.

With the help of this machine, we were able to connect to two more spirits of well-known personalities. One is an Indian, Nawab Siraj ud-Daulah. This was chiefly to satisfy my own curiosity. I checked with Siraj about the Andhakup murder (Black Hole of Calcutta, 1756). With a lilt in his voice, Siraj said he knew nothing about this and that the British had spearheaded this horrible campaign only to malign him! Spirits do not lie. Hence, in my mind at least, his honour was restored with ease.

The second spirit was that of Shakespeare. My question to him was: “There are some who are of the opinion that judging by the standard of your education and your modest family background, it doesn’t seem plausible that you penned these plays and poems. Many people are of the view that the real writer is Francis Bacon. What’s your opinion on this?” To start with, the spirit of Shakespeare, after hearing my question, let out a hearty laugh. He then recited a charming four-line poem on people’s lack of faith and respect and asked me, “Do you know what the name Bacon means in my language?”

“Bacon means country bumpkin. Go and check any dictionary. You will find the meaning. And this country bumpkin is supposed to have created my plays? Have people lost their minds?”

Excerpted, with permission, from The Final Adventures of Professor Shonku by Satyajit Ray, translated from the Bengali by Satyajit Ray and Indrani Majumdar, published by Puffin Books, an imprint of Penguin Random House.