An Encounter With Taslima Nasreen 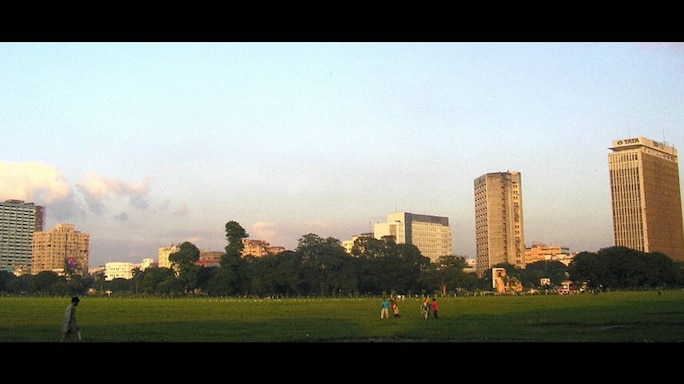 The Kolkata skyline over the Maidan (Photo via Wikimedia Commons)

Suranjan didn’t go towards Park Circus from Rawdon Street although he had meant to; he didn’t take the metro on Park Street either, although he had meant to. Walking past the planetarium, he had considered going to the Academy of Fine Arts, maybe visit an art exhibition in case there was one; but no, he didn’t feel inclined. Still walking absently, he entered the maidan, settling his fatigued body in the shade of a tree with a shaggy top, the leaves swaying gently, the breeze caressing them. Taking off his shirt, which was soaked with perspiration under the strong sun and sticking to his chest and back, he lay down on the grass dressed in his undershirt. Not many people knew him in this city; it wasn’t where he had been born or grown up. He was wearing a cheap watch, and had thirty rupees in his pocket. With such meagre possessions, there was nothing to fear if he fell asleep. Even a thief had more money in his pocket, a better watch too. Suranjan had been wondering if he needed a watch at all. His own answer was, no, he didn’t. Time only went by, it never returned. The past would not come back even if he worshipped his watch devoutly. What was the point of wrapping it lovingly around his wrist then, considering it only went in one direction, taking him along, towards a dark ravine, towards uncertainty, towards death? Suranjan felt an urge to take off his watch and toss it into a lake.

He wanted to sleep, but could not. It could have been a memorable day. Today in Calcutta, Suranjan Dutta, the hero of Lajja, had met Taslima Nasreen, who had become famous for her novel about him. But no one had got to know they had met today. The room in which they had conversed could have been filled with journalists. Did he want to be part of something so grand? He sensed that he did not; he knew he would be a misfit, he was a ‘nobody at all’ now. Those who had expectations from Suranjan Dutta, who had once imagined him to be a revolutionary, would be deeply disappointed if they saw him now. This was better, his present condition, far from everyone’s eyes. A thouroughfare in Kolkata (Photo via Wikimedia Commons)

Those older days, the ones Suranjan wanted to forget, kept coming back to him from the distance to which they had retreated. He was the subject of much excitement in the beginning, soon after leaving Bangladesh, although it was limited to his neighbourhood, without attracting journalists. Only when Sudhamay died did some journalists appear from nowhere with questions. Suranjan hadn’t remotely cared for their stony faces, and the flashes on their cameras had made his eyes water. He didn’t know whether the news of Sudhamay’s death had been published anywhere; he hadn’t checked.

The newspapers were full of articles about Lajja those days. On his way back and forth between Calcutta and Sonarpur, Suranjan would see the book being sold every day on the train. The hawkers screamed out its name. They had only just moved to Calcutta then, and were staying with some distant relatives in Belgharia. Suranjan would go to Sonarpur often those days—a relative of a distant relative there had promised him a job. Suranjan had lived in hope for a long time. Confessing that he was the Suranjan of Lajja had earned him taunts in many places. He had even been beaten up once. Punched in the face, he had sported an under-eye bruise for two months.

Eventually, he had stopped talking about the book. Many had looked askance at his accented Bangla after learning that his name was Suranjan Dutta, saying that if he came from Bangladesh after Babri Masjid, he must be the Suranjan of Lajja. He had denied it vehemently. Who knew what might happen if he admitted it?

It was true that no one had believed him at first, but after a year or so, for reasons he himself didn’t know, a few people had actually accepted that he was the Suranjan of Lajja. He had been called on stage at local events and felicitated. Some had even tried to find him a job. But not everyone had come to know that the Suranjan who was eking out an existence with his parents and sister in a single room in the house of a distant relative in Prafulla Nagar in a suburb of Belgharia was the Suranjan of Lajja. What if they had, though? Perhaps some of them would have come forward to help, or perhaps not. It wasn’t as though anyone was waiting eagerly to come to the aid of destitute refugees and lift them out of their penury. As he gazed at the sky, its blue agony pricked Suranjan in his eyes like needles. He closed them.

In the afternoon, Suranjan went back home and took a nap. Two boys came for coaching in the late afternoon, and two in the evening. Twice a week, he also tutored two students separately in their homes. Suranjan was living proof of the fact that effort did not necessarily bring rewards. The family could not survive on what he earned from his coaching. Kiranmayee had managed to bridge the gap to some extent by selling saris. She embroidered designs on saris at home and made some money by selling them. She hadn’t been doing it very long—it had all begun thanks to the encouragement of another woman in the same line of business. Motivated by the prospect of augmenting the meagre income of the household, she had been quite successful in her venture, and was once again able to provide her son with properly cooked meals. She waited eagerly every day for him to come back home. As he ate, Suranjan told her: “Ma, I met Taslima Nasreen this morning.”

Kiranmayee was flabbergasted, and then too excited to talk. Drinking a glass of water to calm herself, she finally said, “How did you find out about her? Who told you where she lives?”

“A friend of mine who’s a journalist told me. About a year ago. But I didn’t go all this time. I was passing that way today; so, on a whim, I decided to find out what she’s like face to face.”

“What did she say? Did she ask about me?”

“Of course. About you, about Baba too.”

“She doesn’t know about your father, does she? How will she know?” After a pause, she continued, “So is she going to live here alone? What do you think, will the government let her stay?”

“I’m glad you got in touch with her. But I wonder what she’ll think if she sees our hand-to-mouth existence. Maybe she’ll say we weren’t right to leave our country.”

“She didn’t know Maya is alive. She was quite surprised to find out.”

“Entirely possible. She probably didn’t keep track; she had to leave the country after all, poor thing.” Kiranmayee sighed. Both of them were silent after this. 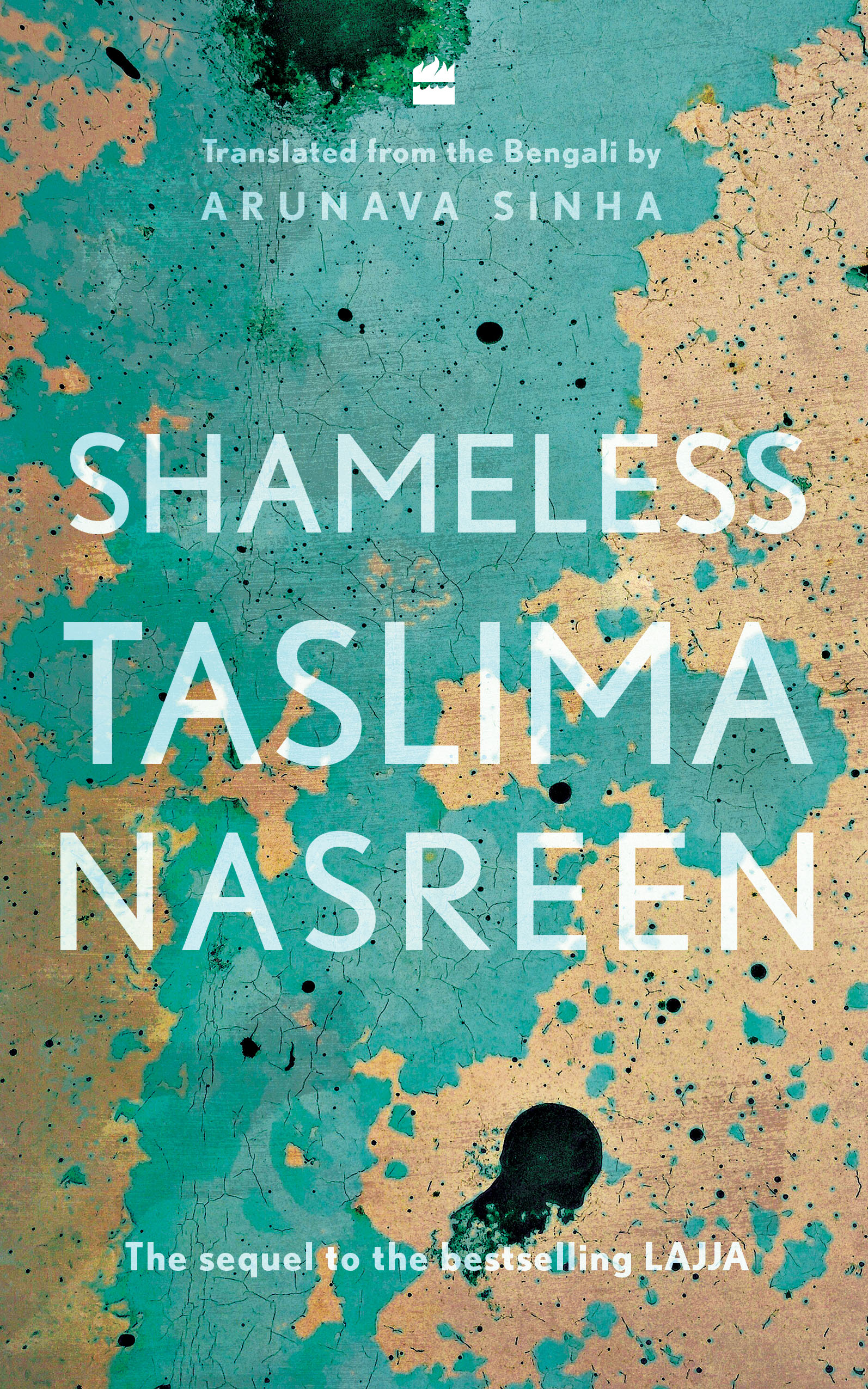 Suranjan finished his meal of pui shaak and fish with rice, drinking up the dal straight from the bowl in the end. People in this neighbourhood ate their rice with dal as the first course, but Suranjan and his family stuck to their old habits. The flavour of paanch phoron stayed if you had the dal at the end of the meal.

Excerpted, with permission, from Shameless by Taslima Nasreen, translated by Arunava Sinha, published by HarperCollins India. The book is now out.