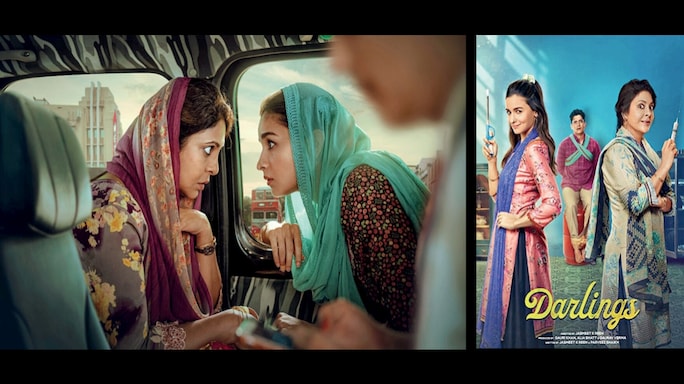 The first spoken—or sung—words that we hear in Jasmeet K. Reen’s entertaining debut film are in the voice of an entitled man. “Hey darlings!” begins the song, “I loves you. You mad you. Please!” (Or “Pleej”, if you’re going for accuracy.) These disjointed pronouncements set up the somewhat caricatured nature of this story, where ungrammatical plurals stand for the way English is spoken in a particular milieu. But what is also evident at this early stage is that the male voice throughout the song is shifting registers: from cajoling and crooning like a regular Romeo laying on the treacle, to whimpering like a petulant boy who expects to get his way. In a black comedy made by women—Reen and writer Parveez Shaikh—about two women dealing with domestic abuse, there is something very believable about those changing tones, and how we experience them through the filter of the female gaze. This is a film where exaggeration and caricature will be put to the service of a very real social issue.

The foreshadowing can also be seen in the opening sequence where Hamza (Vijay Varma) is late for a meeting with his girlfriend Badru (Alia Bhatt), and tries to make it up to her with a teddy bear that carries a ‘Kaha Na Sorry’ sign. In itself, this is a cute scene featuring two lovebirds looking ahead to a bright future (he has just got a job in the Railways), but in hindsight signals a troubling pattern—a man gets drunk and beats up his wife at any pretext; then goes all ‘cootchie-cootchie’ ‘sorry-sorry’ in the morning, and the cycle begins all over again.

When we next meet Badru and Hamza, three years later, they are married and living in a chawl that is in some need of renovation, and where neighbours can hear him knocking her about almost every night.

She bears with it, as many victims of abuse—conditioned to believe there is no way out—do. Besides, she still harbours the hope that they will start a family and that a child’s arrival will cure his alcoholism. More sceptical is her mother Shamshu (Shefali Shah), who lives in the same chawl, and who eventually becomes Badru’s partner in a game of revenge when Hamza goes too far.

I have taken up this much space to establish the film’s basic premise, because it’s best not to reveal more about the plot once it really gets going. Suffice it to say that Hamza goes from being horror-moviebogeyman to pathetic doped clown and then back again, while Badru (once so naïve that she fell for his line that he got drunk again only because he was feeling guilty about beating her up) asserts her agency.

All three leads sink their teeth hungrily into their parts, and fine support is provided by Malayali actor Roshan Mathew as the lovable Zulfi, who we expect will be Badru’s new love interest once the toxic husband is dispensed with—except that Darlings isn’t a film that provides such obvious resolutions.

While there is a bit of slackness in the second half, with some tomfoolery involving Hamza’s suspicious boss, it all comes together satisfactorily in the very end, with a delightful twist on the traditional, homespun wisdom that Indian mothers are expected to pass down to their daughters. Remember Simran’s mom telling her in Dilwale Dulhaniyan le Jaayenge that she should dream but not expect her dreams to come true? You can imagine Shamshu and Badru snorting their tea out through their noses as they crack up at such a thought.