Murder in the Jungle 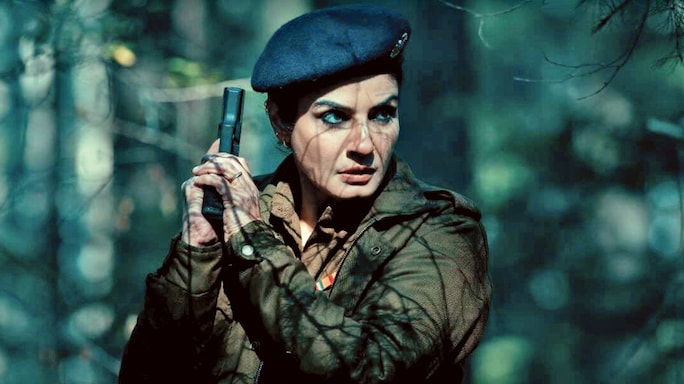 Raveena Tandon as Kasturi in Aranyak

If, like this writer, you were an adolescent when the fresh-faced Raveena Tandon burst on our screens in 1991,it’s pleasing to see her in a very different avatar—as small-town cop Kas-turi, juggling work and home pressures—in the new Netflix series Aranyak. It is also, from the point of view of increasing opportunities for middle-aged actresses,encouraging. But Tandon’s presence is just one of the many arresting elements here.

When a young tourist in the town of Sironah is murdered, Kasturi, who is on leave to be with family, teams up with her replacement Angad (an excellent Parambrata Chatterjee). Their methods clash at first, there is wariness and cultural disconnect, but mutual respect develops as the investigation progresses,and as Kasturi learns that the outwardly poised Angad is battling his own demons.

There is a clear-cut allegorical function toSironah and the jungle it is surrounded by; but this coexists with an attention to detail, and the construction of characters from the inside out.Kasturi’s father-in-law, also a former cop(played by Ashutosh Rana), is obsessed with his failure to catch a mythical “nar-tendva”(leopard-man) that had run amok 19 years ago, and who may now have reappeared. Angad is irritated by such superstitions, but they seem inescapable. Meanwhile other characters—from a local shop-owner to a high-profile minister and her criminal son—have intersecting histories,and too many of them seem to conceal secrets.

In a way this show is reminiscent of the acclaimed recent series Mare of Easttown, also a crime procedural set in a place where everyone knows everyone else. But Aranyak—suspenseful,well-paced and well per-formed—loses nothing in the comparison.