On 10 June 2020, the case of the assassination of Swedish Prime Minister Olof Palme was officially closed. Palme was killed on 28 February 1986 [In 1986, a young Stieg Larsson was working as an illustrator in Sweden’s largest news agency when the country’s Prime Minister Olof Palme was assassinated. In a letter to Gerry Gable on 20 March 1986, Larsson’s recounts the mysterious assassination and why the investigation soon reached a dead end.]

First of all; what happened and what is known about the killing?

A couple of minutes past eleven o’clock on the night of Friday, 28 Feb, Mr. Palme left the Grand Cinema in the company of his wife and eldest son. The visit to the cinema had been decided upon sometime during the day Friday; Mr. Palme mentioned this to a reporter as late as around 2 in the afternoon, but their plans were not common knowledge.

The PM had told the security guards of the SweSecPol, as was his custom, that he would not need them for the evening. This was common practice and everybody knew the PM would happily take strolls on his own at any time of the night, was he not about in an official capacity and was there no call for extra carefulness. At any rate, it is unclear whether the SecPol knew of his plans or not? Olof Palme in August 1985, a few months before his death (Photo via Wikimedia Commons)

Outside the cinema, Mr. Palme and his wife said goodnight to their son and decided—it was a clear night of only ordinary Swedish cold—to walk their way home. The son happened to look after them a minute after they had left and noticed a man following the couple; he later gave a description of the man corresponding to the description of the clothes the killer was wearing, but could see no details of his face.

A second witness met the PM two minutes later and stopped to watch him pass. Looking back he noticed the man following and also said his impression was that in front of the PM another two men were walking. His impression was that they all made a group and concluded that the three unknown persons must be part of Mr. Palme’s security.

The PM and his wife walked down Sveavägen, crossed the street to do some window shopping, and continued. At the corner of Sveavägen and Tunnelgatan [Tunnel Street] the killer closed in on the PM and put one 34 mm Magnum bullet in his back.

According to the police theory, the killing had all the hallmarks of a professional killing. Journalists–with a bit of hesitation—tend to agree with this idea.

Item: The killer used only one single shot, but the weapon was one of the most powerful handguns in the world; anybody who has any knowledge about the weapon knows what a devastating effect the single bullet would cause. As it turned out, the bullet entered in the center of the prime minister’s back, snapped the spinal column, crushed the lungs and ripped the gullet and the windpipe and exited leaving a hole you could throw your hat into. Death was instantaneous or within seconds. The bullet, although it was not meant to disintegrate, was rolling, had a jacket meant to penetrate an eventual bulletproof vest.

The killer fired a second shot aimed at Lisbeth, the wife of Mr. Palme, but apparently not meant to kill. It would have penetrated her shoulder had she not violently twisted away. As it happened the bullet entered her coat at one shoulder and exited at the other, leaving only burns. (And from this fact speculations could be built about the professionalism of the killer, where one school suggests that the bullet was meant to kill but that the shooter was an amateur getting nervous, while another suggests this is proof of it being handled very professionally and that the second bullet was only meant to disable Mrs. Palme as to discourage pursuit.)

Item: Following the murder, the killer made his escape along what appears to have been a QUOTE well-planned route of escape UNQUOTE; up the stairs at the end of Tunnel Street [Tunnelgatan] which disabled any pursuit by car. 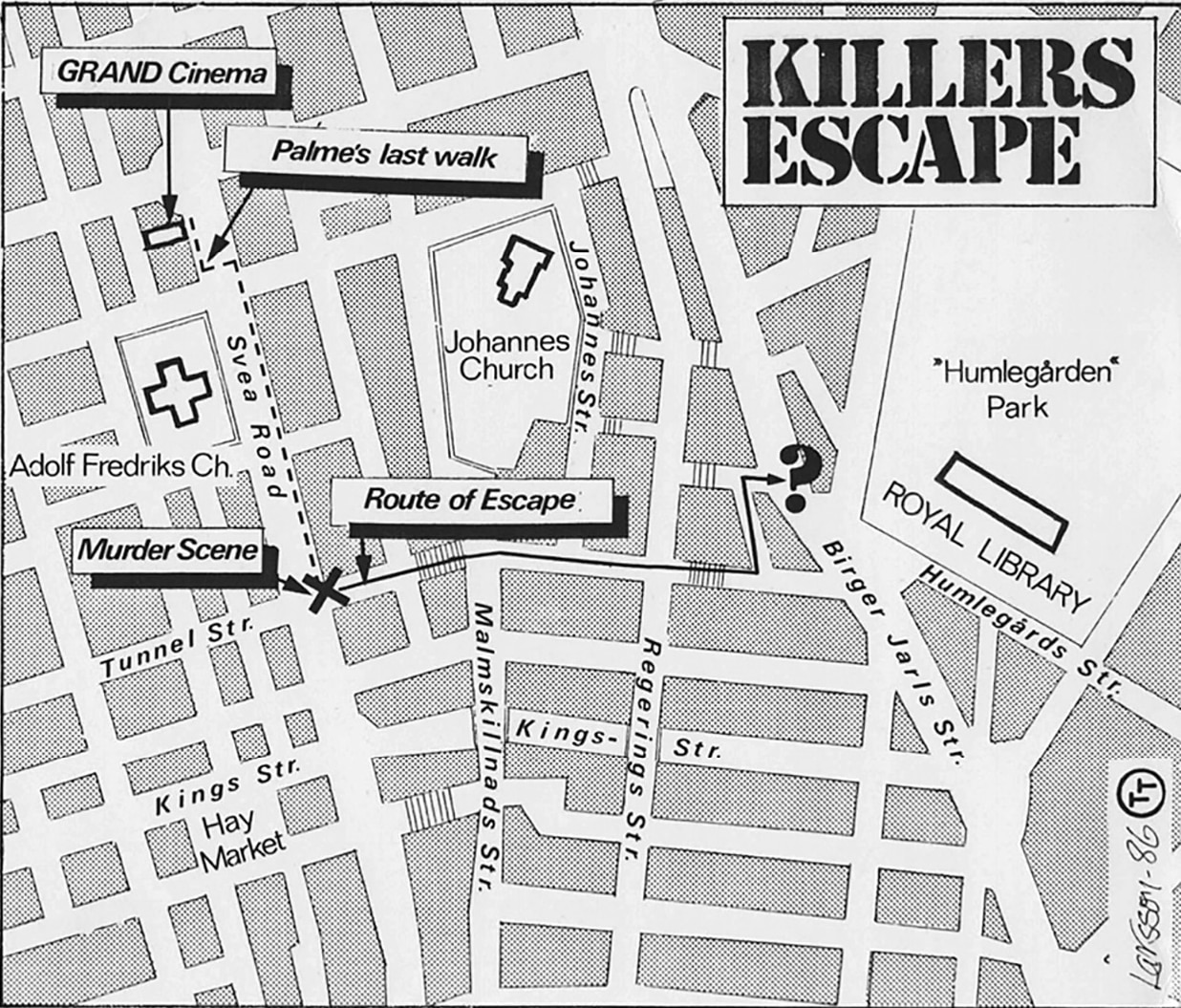 Up to this moment, what I have described are established facts and in-line with official police statements.

This is where we run into trouble.

Several witnesses have given vague descriptions of the killer, statements that are often conflicting. What is considered to be the most frequent description, therefore presumably the most accurate, says:

A white male person aged 30-40 years of middle height and broad shoulders. He was dressed in a gray Andy Capp style of headpiece with flaps you can pull down over the ears, a dark sports coat covering the hips and dark trousers. Several witnesses say he was carrying a small bag with a wrist loop; the style you use for money and passports, etc.

The following is established through testimonies of several witnesses:

1) A 25-year-old man, Lars, happened to meet the killer at the end of The Tunnel Street, without being seen by the killer since they passed each other on different sides of a construction hut. Lars hesitated for some precious seconds—not more than a minute—and then decided to take up pursuit by foot. At that stage he did not know it was the PM who was the victim. Following the same route as the killer, Lars quickly ran up the steps (86 of them), but at the top the killer was nowhere to be seen. Acting on instinct, Lars continued straight on along David Bagares Gata where after one block he met ... Mourners at the assassination site (Photo via Wikimedia Commons)

2) A couple strolling towards him. Asking them if they had seen a man running along the street, they both agreed that they indeed had met him only 30 seconds earlier, and that he passed them continuing down the street. Lars was mystified, he later said, that he was unable to get a second sighting on the killer, believing the man would not have so much of a lead.

3) A fourth witness—unidentified but known as “Sarah”—stepped forward the next morning offering new evidence. “Sarah” is a 22-year-old artist specializing in portraits, and according to her story he had passed the Smala Gränd [Thin Alley]—a shot 100 m off road to David Bagares—at the approximate time of the killing. Midway along the alley, she met a man corresponding to the general description of the killer; the man seemed in a hurry but hesitated for a second when meeting her. When Sarah got home, later on that night, she put on the radio and caught the news of the murder. She immediately made the connection to the man she had met and sat down to do his face on a piece of paper. This is the same drawing which formed the basis of the police computer graph of the suspected killer.

These four witnesses—selected among the more than 10,000 leads and testimonies, are considered to be reliable people giving hard-core evidence.

4) A fifth witness—but generally not so reliable—is a taxi driver who was waiting in his cab at the Snickarbacken [Carpenters Hill] when he saw a man run past his car and hurriedly enter a parked green or dark-blue Passat, which apparently was waiting for him. The car took off in a hurry.

The Carpenters Hill is located immediately beyond Thin Alley, and there is a possibility that the taxi driver’s evidence could have something to do with the killer’s escape, but there are question marks. The cabbie pinpoints the time of the incident to some 10-15 minutes after the shooting, but it only takes 3-4 minutes to run the same way. Excerpted with permission from Jan Stocklassa's The Man Who Played with Fire: Stieg Larsson's Lost Files and the Hunt for an Assassin, published by Amazon Crossing, October 2018