This remarkable film, by the maverick South Korean director Bong Joon-Ho also picked up three other awards this morning 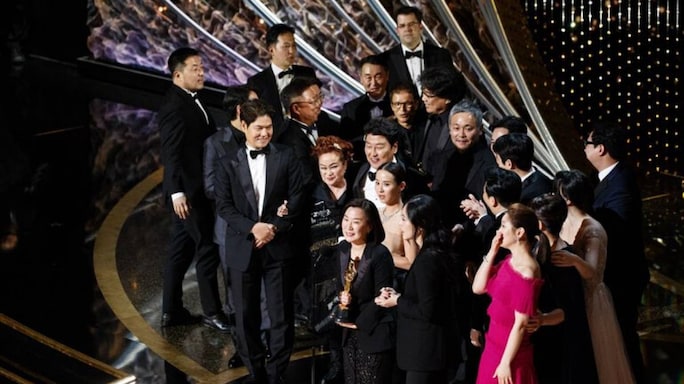 The cast of Parasite at the Oscar Awards ceremony (Photo: oscar.go.com)

The Oscars happen every year, but something about 2020 feels truly special. A huge wall has been broken: For the first time in its 92-year history, the Academy has given the Best Picture award to a non-English language film, Parasite, directed by the the maverick South Korean director Bong Joon-Ho.

Leading up to the Oscars, a lot of the conversation about the nominations centred around how they were not diverse enough—the all-male director shortlist, the presence of only one non-white nominee in the major acting awards. The Academy Awards were criticized for the same lack of diversity on stage by presenters and performers as well—but happily, this year’s Oscars will be remembered for moving cinema forward.

"I feel like a very opportune moment in history is happening right now," said producer Kwak Sin Ae. And Parasite’s four-Oscar haul is undeniably historic: First Asian winner of best original screenplay, first film to win both Best Film and Best International Feature (previously known as Best Foreign-Language Film). Parasite had previously won the Palme d’Or at Cannes, then won big at the SAG awards, the BAFTAs and the Independent Spirit awards, but few were expecting the Oscars to feature Bong Joon-Ho and his translator four times on stage with a trophy on this night.

It’s unlikely that Bong himself expected to win, in his now-familiar deadpan humorous style, he’d previously called the Oscars a local award, informed audiences that if they could overcome an inch-high barrier of subtitles they would find a great wealth of international cinema, and had expressed his enthusiasm about the Oscars being the last night of a long tour, after which he could go home. Parasite is a remarkable film, a social satire about class differences, in which a poor family infiltrates a rich family’s house through deception, but as secrets are revealed, the many ways the rich prey on and dehumanize the poor are harshly exposed. It is a story of the times we live in, but rendered universal by the themes and conflicts it explores. According to Bong, people around the world live in the same country, and that is capitalism, and as the film steers from social comedy to violent, chaotic dystopia, it never loses sight of either its values or its multi-layered vision. At least partly inspired by Bong’s own experiences as a math tutor to the child of a well-off family in Seoul in his early 20s—interestingly, he was introduced to this family by his wife, then his girlfriend, who was working for them as well—Parasite will now not only get a new lease of theatrical life, but will go down in film history as a deserving winner in the year the Foreign Language Film became the Best International Feature.

In their acceptance speech, the producers thanked Korean audiences for challenging them and pushing them to always do better—and if there’s any lesson for Indian film lovers in this story, this is it. Until then, we can celebrate Parasite’s victory, hope Bong’s announced plan of being ready to drink until morning goes well, and look forward to the limited series of Parasite he’s developing with HBO, in collaboration with Succession’s Adam McKay.

Samit Basu is an author, screenwriter and director.