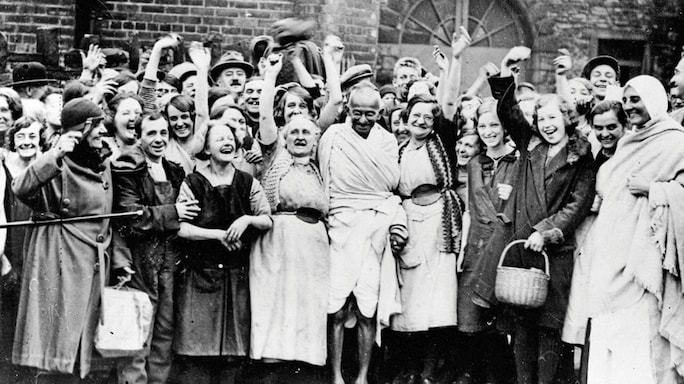 It was Lancashire’s cotton town of Darwen that felt keenly the sting of Mahatma Gandhi’s swadeshi movement. Unlike the rest of Britain that mocked Gandhi, his methods and strange demands, the mill workers of Darwen did not hold the Mahatma’s protest against him. They just badly wanted him to also see their suffering. His empathy, they felt, would win the day. In September 1931, when a 62-year-old Gandhi visited London to discuss India’s future, Darwen extended a warm invitation. He accepted.

Although it was Gandhi’s boycott that had crippled their industry, they flanked him the way they would a matinee star. There was laughter, hurrahs, and as seems obvious from this photograph, some shyness on Gandhi’s part. He told the workers about India’s struggles, all the while refusing to cede an inch. When an old weaver complained about how bad things were, Gandhi only said, “My dear, you have no idea what poverty is.”

Nearly 90 years after this photo was shot, it serves as a reminder of our hard-won independence, yes, but it does also prove that inter-dependence can, at times, matter, too.