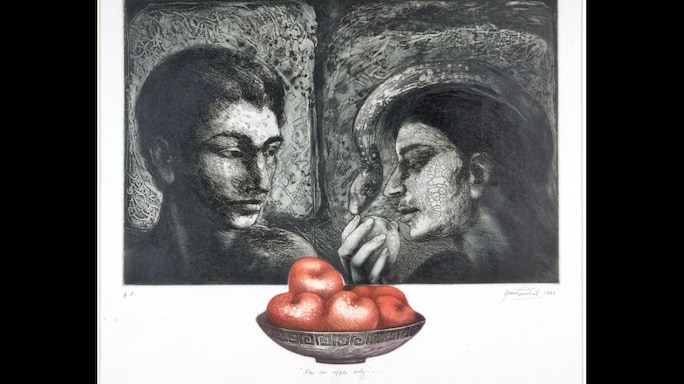 Anupam Sud had once told an interviewer that the most transparent layer in all her etchings “is the fundamental nature of humanity and its temperaments”. She then went on to say that much of her work involves itself with interpreting “manipulation, power’s link to weakness and temptations”. On display at Delhi’s Kiran Nadar Museum of Art until 31 October, the exhibition Between Vows and Words: Anupam Sud does make many of these themes conspicuous, but it is arguably in For an Apple Only…that the printmaker’s concerns crystallize.

No power dynamic will perhaps ever trump that of the Original Sin.Beyond the aesthetics of Sud’s work—the red that pops against the stark black-and-white, the faces she etches like snakeskin—there is an obvious moral dimension at play here. If the road to hell is paved with good intention, the knowledge of good and evil also results from plain desire, not avarice; from curiosity, not transgression. Much-maligned—as temptress, as reckless, as weak—Eve saved us all. As Sud suggests, we would not have known pleasure, or our ourselves, were it not for Eve wanting an apple.