The Mughlai paratha has always occupied a special place in chef Sadaf Hussain's heart since his childhood. Here, he recalls how his grandmother used to make them 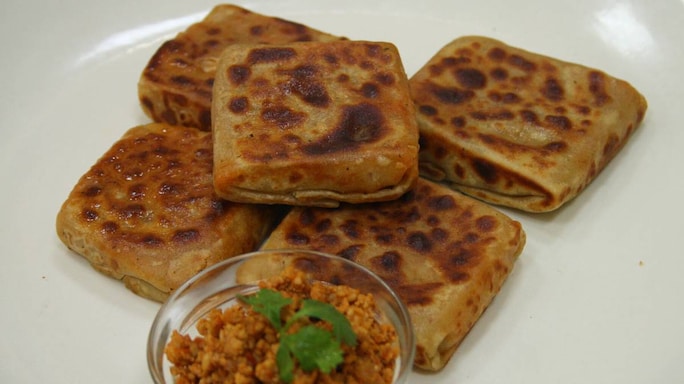 Everyone in my family has many stories to tell about Nanna, my maternal grandmother, and almost all of these have food at its heart. They say that even a simple roti made by her tasted amazing. They were thinner and softer than any other roti they’d ever had. So when it came to matters related to food, everyone would seek her expert advice.

During Ramzan, Nanna could always be found on the verandah of Bilqis Manzil (the house was named after her), chopping fruit and vegetables for a salad while others hovered around her to get a final approval on the other dishes. I remember the month of Ramzan with great fondness as it was a time when the entire family would come together to celebrate the festival of Eid. It was a time to share, celebrate and bond.

Our days during Ramzan would pan out something like this. The adults in the family rozedar (people who are observing the fast) would wake up at 3 a.m. for sehri, the meal that is eaten before sunrise, while the children only managed to stir 10 minutes before sehri was over, just in the nick of time to quickly shovel down some food before going back to sleep. In our family the tradition was to eat light, fulfilling food in the morning. So, the menu usually comprised dalia (a porridge), sevai (vermicelli) and other light food – a balanced mix with enough sugar, carbohydrate and fibre to get through the day. Nanna and the other elders of the family would go for their fajr namaz (morning prayer) while Chote Mamu would switch on the water pump to fill the main tank and the buckets, and only then would he pray. He’d then clean his bike, which he was very fond of, and then get ready to head to court around 8 in the morning. The rest of the family would spend the day reading the Quran, sleeping, cooking for the kids, while the children played Ludo. I’d be the first one to bring out the board and entice my cousins to a game. My favourite colour was blue and so it was always my first choice of buttons, unless the younger ones complained. We had a saying: ‘Blue bulata hai, hara harata hai, lal lalchata hai aur pila pilata hai.’ (Blue calls the other pieces to it, green will defeat you, red will simply tease you, and yellow is useless.)

As the day wound down, and the time of iftar, or the evening meal, drew near everyone would once again gather in our big aangan, the beautiful space full of green plants and a small henna tree in the corner, to lay down the dastarkhān. It was the younger lot’s duty to help set it up under the watchful eyes of Chote Mamu and Majhle Mamu. Our dastarkhān would be laid out with sherbet, dates, two kinds of pakora with green chutney and tomato ketchup, channa ghugni, fruit salad, steamed rice, kebabs or pan-tossed meat, and something sweet like moongechi, jalebi or meethe samose. While the elders cooked and served the food and the children bustled around doing smaller errands, Nanna would be at the centre of this storm, encouraging, giving instructions and scolding us if she saw something being done incorrectly. She was the authority figure, the driver of this chaotic, but well-oiled, machine. She’d also take the iftar food out for mohtaj (dependants) and send three or four portions to the mosque near our house.

Once everything was served and laid out, and the azan from the nearby mosque sang into the evening, we would sit down and feast. We would talk and make fun of the younger children and boss them around, but usually because we would be so hungry, our conversations were limited to asking others to pass on the bowl of fruit, pakora, ghugni water and other delicacies that were served. Post iftar, the funniest and the most satisfying part of the discussion would ensue: We’d already start discussing what we would eat for dinner while sipping on our evening tea. The food wasn’t even digested in our tummies and we’d be talking about what to eat next!

After eating, the men and boys of the family would make their way to the mosque to pray, and the ladies would settle in the big room adjoining the aangan to offer namaz. Once over, the feast resumed. This time it was dinner. Unlike iftar, dinner was never eaten at the same table or at the same time—it would depend on people’s moods and how hungry they were. The table would be laid and remain spread till midnight, and sometimes all night long, till we woke up for sehri. Dinner usually consisted of non-vegetarian dishes to provide protein and balance our meal, helping us recover from the whole day of fasting. It also included the leftovers from iftar.

My favourite pastime during Ramzan, when not playing Ludo, was to hang around in the kitchen with my lalla (my mother’s youngest sister) and mami (my mother’s brother’s wife), learning their tricks and techniques. The kitchen was the only place that was always busy and buzzing and so I preferred being in there more than anywhere else. It was here that the foundation blocks of my love for cooking were laid. As I grew up I effortlessly transitioned from eager audience to willing participant. 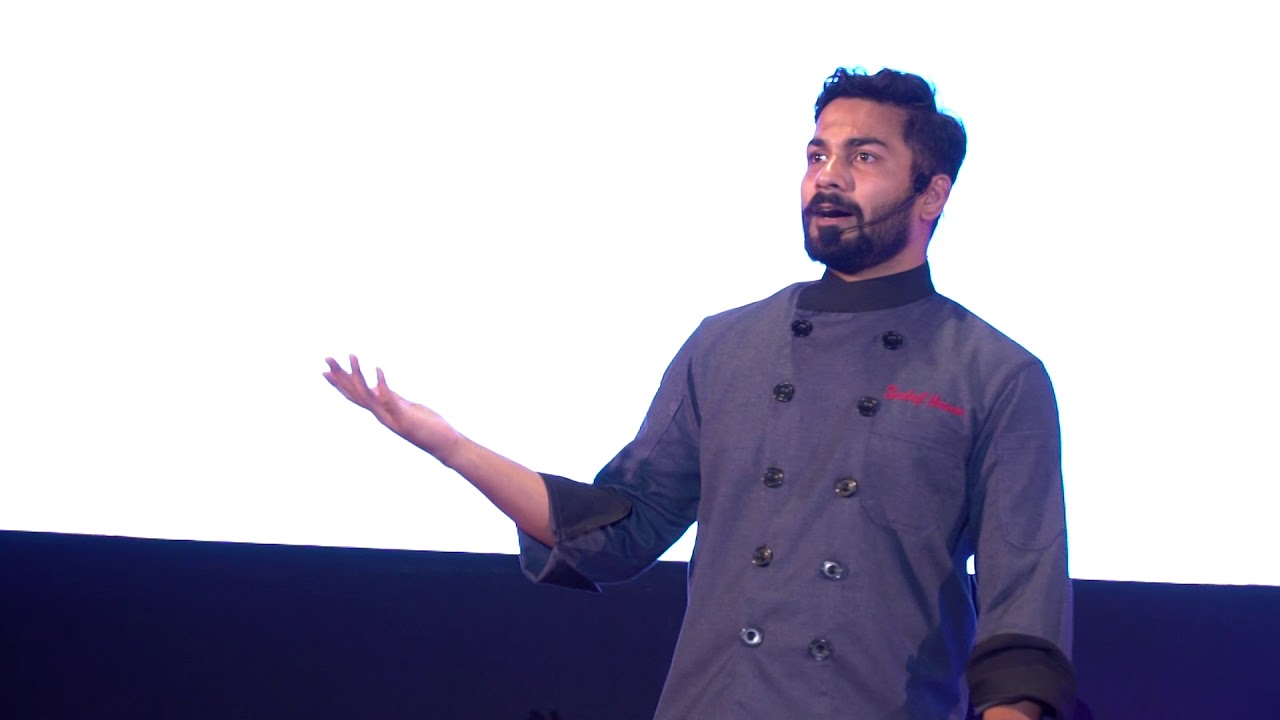 Last Ramzan I was in Ghaziabad (where my extended family now resides), which often turns into a mini-Sasaram. The dishes on the menu were similar to what I used to eat as a child. Inspired after watching one of my YouTube videos, my mami decided to make luqmi—a square, fried pastry with meat stuffing. Luqmi comes from the Urdu word ‘luqma’, which means ‘bite-size’. It is essentially a bite-sized meat samosa. As I was rolling out the dough, Nanna came and sat next to me. Being a fantastic cook herself, she’s always been interested in my life as a chef and loves to hear about my experiences. She asked me if I had ever eaten a Mughlai paratha. I nodded yes, imagining the one I had eaten at a Durga Puja pandal in Delhi. A Mughlai paratha is basically a crispy, deep-fried, stuffed meat paratha made of thinly rolled maida (white flour); this is served with green chutney and butter. Nanna laughed and told me that whatever I had eaten wasn’t a Mughlai paratha but a close imitation.

She explained that ‘parat’ means layer and ‘atta’ means flour, and when you combine these two words or elements you get a ‘paratha’. A real Mughlai paratha (or as the Bengalis call it: Moghlai porotha) must have extremely soft dough that is rolled thin enough to look like translucent paper, to which ghee is then applied. This dough is collected back, folded and rolled out again a few times. The secret to a good Mughlai paratha lies in the technique of folding the dough and frying it at the perfect temperature – shallow fried on a low flame to make sure it’s cooked through and retains its crispiness. My lalla gave me another trade secret – the dough should be so light that it floats on water. Nanna also gave me many ideas for what the stuffing could be—her personal favourite is eggs topped with some soaked nuts. My time spent with my nani and dadi or anyone from the older generation has been priceless because they have so many interesting insights and secrets to share.

I learned about the history of the Mughlai paratha from an article in The Hindu written by Sumit Paul. The story goes that the Emperor Jahangir was bored of eating simple parathas with keema and so he challenged his cook, Adil Hafix Usman, to come up with a recipe that was unique and unconventional. Usman came up with zabir-fala or anda-roti, which later gained popularity as Mughlai parathas. Jahangir was delighted and rewarded him richly. To protect the source of his richness, Usman passed on the hit recipe to his son Farogh, who then shared it with his own sons but made them swear to share it no further, thus creating the exclusivity of the dish.

However, Kalyan Karmakar, author of The Travelling Belly, writes in his blog that the dish isn’t ‘Mughlai’ at all. In an interview with his friend, Prita, he asks whether this dish truly is ‘Mughal’ and she admits that calling the parathas ‘Mughlai’ was more of a branding exercise to grab the attention of customers. She points out that these parathas are not offered in traditional Muslim-run eateries. At most one can find rolls, but not Mughlai parathas.

There will never be one exact story about the origin of a dish, unless it is documented at its birth. But it is precisely this, the contradictory and sometimes downright unbelievable alternative narratives that make food stories all the more interesting and magical. In a way, this book is my attempt to freeze and capture the stories about my family especially those about Nanna. And so the recipe I’m putting down here is Nanna’s. It is a dedication to her undying curiosity for food and her single-minded determination to serve only the most delicious fare.

Now that we have all grown up, we rarely go to Sasaram during Ramzan or otherwise. Chote Mamu, Mami and their children have moved out of Bilqis Manzil. Nanna has grown old and doesn’t move around much. She lives with my other mamu and aunt in Ghaziabad. We all fall prey to the vagaries of time. But every Ramzan, as I eat or cook my first iftar, I am always transported to those golden years in Bilqis Manzil, when our humble dastarkhān brought us all together for a moment in time. 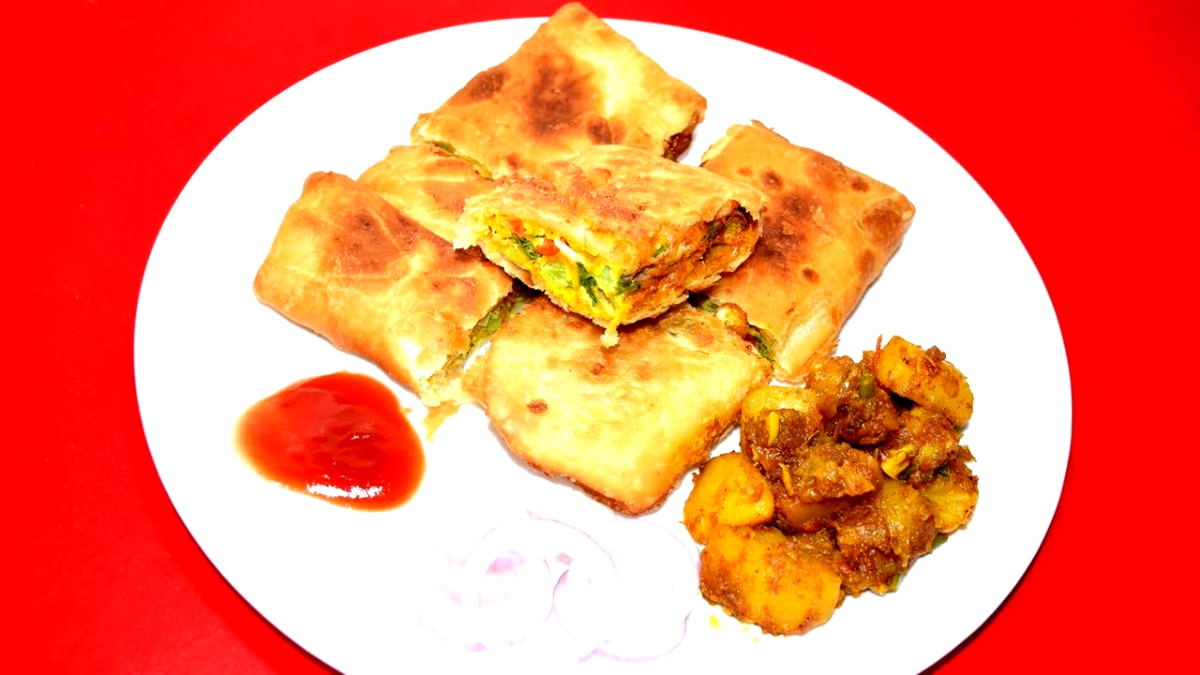 1. Mix ghee, water and flour together and knead till a soft dough emerges. Cover it with a damp cloth. Leave it aside for 60–90 minutes.

2. Break an egg in a bowl, and mix in the keema, onion, salt, green chillies, freshly chopped coriander leaves and dry fruit.

3. Divide the dough into five round balls, cover and leave it to rest for about 10 minutes.

4. Roll out the dough to make a flat, rectangular shaped roti.

6. Seal the ends by folding over four ways towards the centre, so that the ends overlap, forming a square.

7. Fry it on each side till it turns golden-brown.

8. Serve hot with either chutney or yoghurt, or both. Excerpted, with permission, from Daastan-e-Dastarkhān: Stories and Recipes from Muslim Kitchens by Sadaf Hussain, published by Hachette India