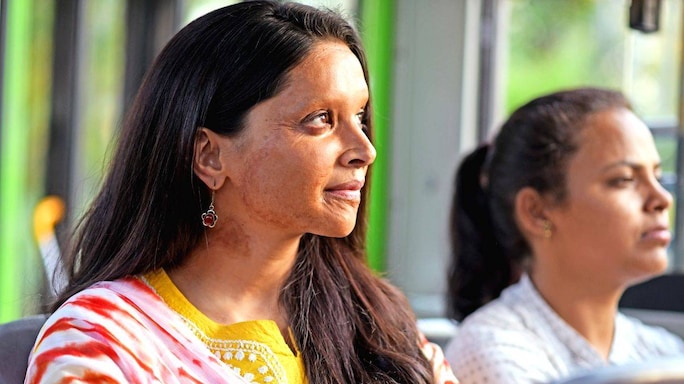 A still from Chhapaak

Meghna Gulzar’s Chhapaak is the second major Indian feature film of the past 12 months (along with the Malayalam film Uyare) about an acid-attack survivor. Both stories are about a woman picking up the pieces of her life and serving as an inspiration to others, but Chhapaak—being based on the real-life experiences of Laxmi Agarwal—is also explicitly an “issue” film about the campaign against easy availability of acid in the market. This makes for an absorbing, if somewhat protracted, story that is well-performed all around, notably by Deepika Padukone as Malti, Madhurjeet Sarghi as her lawyer Archana, and Vikrant Massey as the diligent journalist-turned-activist Amol.

There has been much discussion about a glamorous actress playing a part like this, behind heavy make-up, but the Malti we see for the bulk of the film isn't severely disfigured; surgeries have at least smoothed over the worst of her scars. This means that her features, apart from her eyes, are immobile and mask-like—she reminded me at times of the girl in the classic French film Eyes Without a Face, the calm at the centre of a storm. And to a degree, this blank-slate effect seems intentional: Malti has, of course, been through something horrible, and is still fighting to get her assailant convicted—but she is also a conduit and a sounding board, spending much of her time trying to help and empower other women in similar situations. Nor does the film shy away from suggesting that – with well-off benefactors facilitating the best medical treatment for her—she is relatively privileged compared to many of those other lower-middle-class victims. In one quiet, nuanced scene, another girl, badly scarred, is astonished to learn that Malti has had seven surgeries already—“I can’t even put together the money for a second operation.”

Chhapaak is at its best in little moments like that one, or in the gently confrontational relationship between Malti and Amol, or in a scene where Malti catches her father drinking and promises she won’t tell her mother. (Affectionate as this exchange is when it occurs, it acquires a bitter tinge in a later scene involving an outburst by Malti’s mother.) Or when a dialogue fleetingly but pointedly raises the question of whether an acid ban can really achieve anything when all people have potential “buraai” (badness) in them, which can find other outlets; as Amol observes, acid is created in the heart first, only then does it make its way to the hand that throws it on someone’s face.

Never a formally adventurous director, Meghna Gulzar’s bare-bones style can be like old-school TV, full of reaction shots, and courtroom scenes that can feel static. At times, as in her earlier Raazi, one feels like one is expected to give points to serious intentions over strong film-making. But Chhapaak’s strengths lie in its convincing depiction of the many personal conflicts that can play out even when people are together for a good cause. Malti has to find a balance between getting on with her life and fighting the anti-acid fight—which, as her mother suggests, is a luxury available to people like the anglicized lawyers; their own family, beleaguered on other fronts, can’t afford it beyond a point.

Around three quarters of the way through, I assumed that the film was not going to spell out exactly what had happened between Malti and her assailant Babloo, and how her 'boyfriend' Rajesh fit in the picture; that we didn’t need to know every last detail. It would probably have been better that way, because Chhapaak slackens in its final section when it provides this backstory in flashback, complete with a slo-mo recreation of the attack and the cliched image of a courtroom in sombre silence—followed by a judgement in her favour. Uyare also showed us the series of events that led up to the attack on Pallavi (played by Parvathy), but in that case we were privy from the beginning to her relationship with a domineering, insecure man who goes full psycho when he feels rebuffed. In Chhapaak, on the other hand, the climactic scene is presented as if a great mystery is going to at last be unravelled—and it doesn't work, either within the logic of the narrative (surely Malti has told this story before, during earlier hearings) or in terms of imparting new information to the viewer; Babloo is too peripheral a character, and his jealous, possessive rage is too banal, too predictable, to sustain the drama that is placed on it at the very end of the film.

Perhaps, then, the real function of those climactic sequences was to show us the Padukone we know, in glowing splendour rather than behind make-up, for at least part of the film’s running time. And if that sounds cynical, it’s worth considering that the scene also shows us Malti as she was before the attack, so we can get the full measure of what she lost. The beautiful Padukone may not seem the ideal choice to play an Everywoman in this sort of narrative, but it’s too easy to dismiss a film for 'trivializing' an important issue by casting a big box-office draw. Movie stars also serve as vicarious, larger-than-life self-projections. Perhaps a subtext of this film—whether intended or not—is that many acid-attack victims, regardless of background, height or features, are a Deepika Padukone in their own heads when they fantasise about confidently stepping out into the world, or when they try their wedding jewellery on in the mirror—and that this self-image, cruelly snatched from them, can take ages to regain.