Above And Beyond: A Review Of India From Above

With magnificent aerial views of the country, India from Above can take your breath away 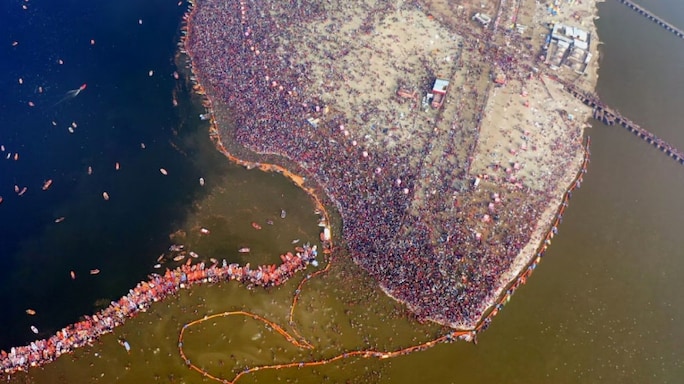 Prayagraj in Uttar Pradesh as seen in India from Above

The Lonar Lake in Maharashtra is a thing of wonder. Formed when an asteroid collided with Earth, the lake is said to be more than 50,000 years old. India from Above, a two-part National Geographic documentary series, now streaming on Disney+ Hotstar, approaches Lonar Lake from the sky. Seeing the edges of the crater, it is easy to imagine that hurling asteroid and the devastation of its impact. Similar views of the Himalayas and the Indian Ocean are awe-inspiring, but the series awakens you to the histories of our geography and culture, first.

More than a set of pretty pictures, India from Above is also an education. In Madhya Pradesh, the series tells the story of how Bhedaghat’s fossil cliffs took their magnificent shape; in Cherrapunji, how man shaped nature to build weatherproof root bridges; how Agariya tribesman hunt for salt in the Rann of Kutch.

The panoramas make it hard to tear your eyes away, but the documentary humanizes its vistas with a deft touch. One sees Ladakh through the eyes of Shabbir Hussain, an ultramarathon runner. Rather than chase Gir’s lions, the series focuses on the late Bharatdas Darshandas, the lone voter in an altogether forested area. The human tumult of the Kumbh Mela is later juxtaposed with the solitude of Bhanwar Ram Meghwal, who quietly feeds the demoiselle cranes that migrate to Rajasthan’s Khichan village every September.

Narrated by actor Dev Patel, the series is made memorable by the specificity it brings to its staggering bird’s-eye view and cinematography. It is so seductive, it makes you forget climate change, even while documenting the severity of monsoon.