A Storm In The Sundarbans

The noise of the storm deepened and another roar made itself heard, over the rumbling din of the gale: a noise like that of a cascading waterfall. Stealing a glance through her fingers Piya glimpsed something that looked like a wall, hurtling towards them, from downriver 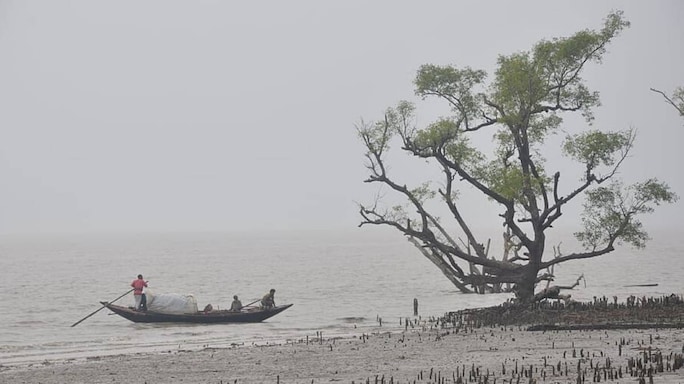 Prelude to a storm? Or is its aftermath? (Image: Pxfuel)

The minutes crept by and the objects flying through the air grew steadily larger. Where first there had been only twigs, leaves and branches there were now whirling coconut palms and spinning tree trunks. Piya knew that the gale had reached full force when she saw something that looked like a whole island hanging suspended above their heads: it was a large clump of mangroves, held together by the trees’ intertwined roots. Then Fokir’s hand tightened on her shoulder and she caught a glimpse of a shack spinning above them. She recognized it immediately: it was the shrine he had taken her to, in the interior of Garjontola. All at once the bamboo casing splintered and the images inside went hurtling off with the wind.

The stronger the gale blew the more closely her body became attuned to the buffers between which she was sandwiched: the tree in front and Fokir behind. The branch they were sitting on was so positioned that it was on the sheltered side of the tree, pointing away from the wind. This meant that Piya and Fokir, sitting astride the branch, were facing in the direction of the wind, taking advantage of the ‘shadow’ created by the tree’s trunk. But for this lucky circumstance, Piya knew, they would have been pulverized by the objects the gale was hurling at them. She felt it in her bones every time a branch broke off or a flying object struck against the tree; at times the wood would creak and shudder under the force of these collisions and the roll of fabric around her waist would bite into her skin. Without the sari they would long since have been swept off the branch.

Sitting behind her, Fokir had his fingers knotted around her stomach. His face was resting on the back of her neck and she could feel his stubble on her skin. Soon her lungs adapted to the rhythm of his diaphragm as it pumped in and out of the declivity of her lower back. Everywhere their bodies met their skin was joined by a thin membrane of sweat. 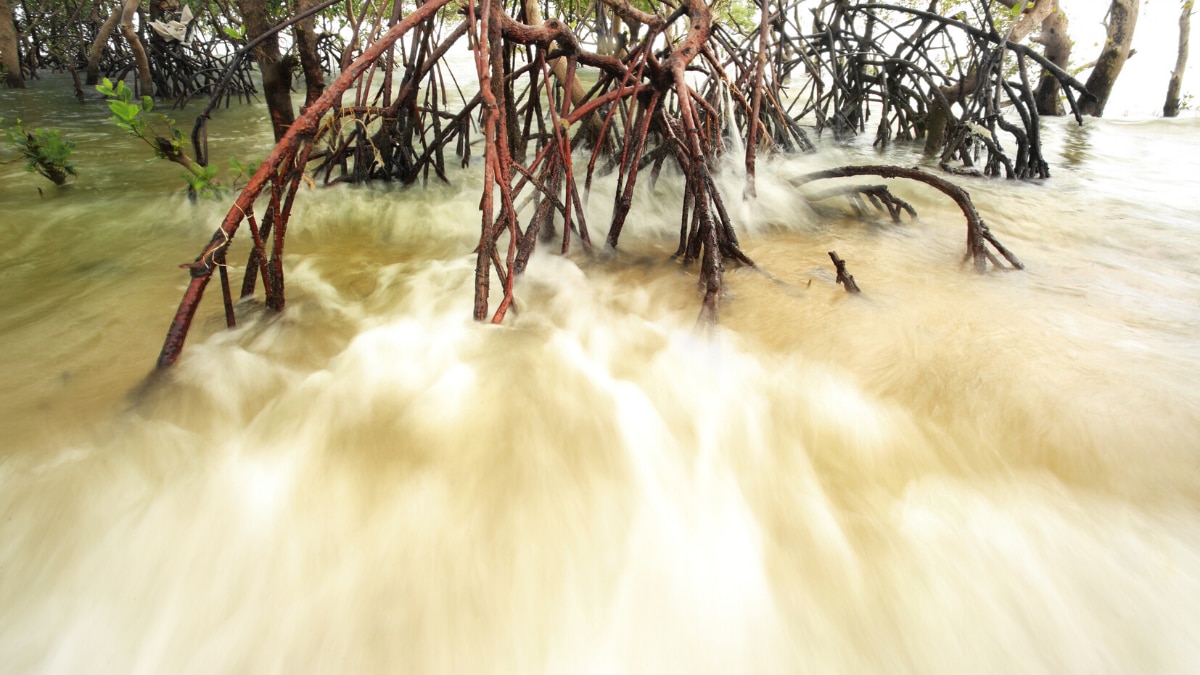 Then the noise of the storm deepened and another roar made itself heard, over the rumbling din of the gale: a noise like that of a cascading waterfall. Stealing a glance through her fingers Piya glimpsed something that looked like a wall, hurtling towards them, from downriver. It was as if a city block had suddenly begun to move: The river was like pavement, lying at its feet, while its crest reared high above, dwarfing the tallest trees. It was a tidal wave, sweeping in from the sea; everything in its path disappeared as it came thundering towards them. Piya’s mind went blank as disbelief yielded to recognition. Up to this point there had been no time for terror, no time to absorb the reality of the storm and to think about anything other than staying alive. But now it was as if death had announced its approach and there was nothing to do but to wait for its arrival. Her fingers went numb in fear and she would have lost her hold on the tree, if Fokir hadn’t taken her hands in his own and held them fast against the trunk. Piya felt his chest expand as he gulped in a deep draught of air, and she did the same, swallowing as deep a breath as she could manage.

And then it was as if a dam had broken over their heads. The weight of the rushing water bent the tree trunk almost double. Encircled in Fokir’s arms, Piya felt herself being tipped over and then upended as the branch met the ground. All the while, the water raged around them, circling furiously, pulling at their bodies as if it were trying to dismember them. The tree strained at its roots and it seemed that at any moment it would be torn from the earth and added to the storm of turbulence following the wave.

Piya knew, from the pressure in her lungs, that the water above them was at least three metres deep. The sari that had seemed like a godsend before, now became an anchor tethering them to the riverbed. Pulling her hands away from Fokir’s grip she began to tear at the knot so that they would be able to break free and rise to the surface. But instead of coming to her aid, Fokir took hold of her fingers and ripped them from the knot. His whole weight was on her now, and he seemed to be fighting to keep her where she was. But she could not stop struggling—it was impossible to hold still when the air was almost gone from your lungs. And then, even as she was struggling to slip out of Fokir’s imprisoning grip, she felt the pressure of the water diminishing. The crest of the wave had moved on and the tree had begun to straighten itself. She opened her eyes and saw that there was light above, faint but discernible: it came closer and closer and suddenly, just as her lungs were about to burst, the tree snapped almost upright and their heads were above water. The crest of the wave having passed on, the trough had caught up, forcing the water to subside a little: it fell not to its earlier level, but to a point just below their feet.