A Lifetime In A Fist: Looking Back At Irrfan Khan's Genius In The Namesake 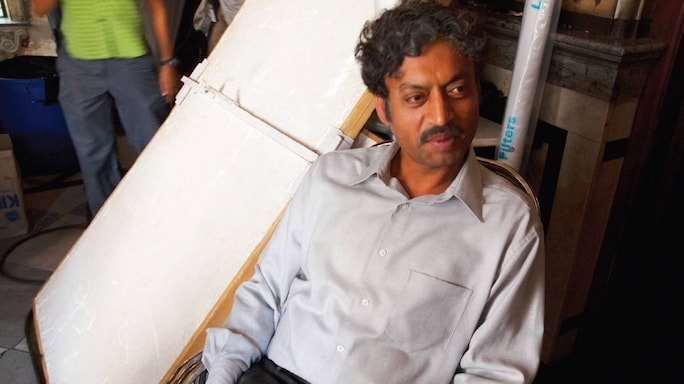 When Mira Nair was in the midst of completing her adaptation of William Makepeace Thackeray’s Vanity Fair (2004), her mother-in-law died of negligence at a New York hospital. Nair’s in-laws were from Uganda, but she and her husband buried her mother-in-law on a snowy day in New Jersey. On the way back to India, to shoot the closing scenes of Vanity Fair, Nair started to read Jhumpa Lahiri’s The Namesake. “I felt Jhumpa understood my grief,” Mira says. “It completely captured me—a thirty-year cornucopia of the ‘70s Calcutta that I had grown up in, all the way to today’s Manhattan.”

From the beginning of the casting process, Mira was sure about one thing. “Irrfan was always going to play Ashoke Ganguli,” she says. Tabu and Irrfan are not Bengali, so Mira immersed them into Bengali culture. And everything about her two leads, their hand gestures, the way they tilt their heads, etc., convinced even discerning viewers that the two actors were Bengali.

To get his Bengali accent right, Irrfan spent a lot of time with Jhumpa Lahiri’s father, a retired university librarian who lived in Rhode Island, while a Queens-based Bengali restaurateur and caterer, Shankar, became Irrfan’s Bengali coach. “At one point Irrfan went so deep into the accent that we had to pull it back,” Mira says. “It was challenging to do a speech with an authentic Indian-Bengali accent, but also understandable for the West without it being subtitled.”

Even though Irrfan’s wife is Bengali, he had to learn specific Bengali sentences to play his character. “But he is proficient,” Mira adds. “Unlike most Indian actors, Irrfan really works hard. If he needs any help, any crutches he can see, he grabs it, then he distils it and takes it to another level.”

Jhumpa Lahiri’s novel was essentially the story about Gogol (played by the Indian-American actor Kal Penn)—a second-generation Bengali-American, son of Ashima and Ashoke, burdened by the name his father gave him since he believed that a copy of Nikolai Gogol’s The Overcoat had once saved his life in a train accident. “We all came out of Gogol’s Overcoat,” Ashoke tells his clueless drugged-out teenage son Gogol in the film. “One day you will understand.” It is one of the most moving scenes in the film and it is repeated towards the end as well. There is no way a person watching that scene will not feel tears well up in their eyes.

In Sooni [Taraporevala] and Mira’s able hands, the film also became the love story between Ashoke and Ashima, a young couple from Calcutta, growing into their marriage and life in America, their adopted country. Mira modelled the couple’s marriage, a quiet romance between two kindred souls, based on her observations of her in-laws.

In The Namesake, from their violent, seductive characters in Maqbool, Irrfan and Tabu transformed themselves into a calm couple living in suburban America. There are some lovely delicate scenes between Ashoke and Ashima, where Irrfan and Tabu say a lot without really speaking. Not once do they raise their voice. In fact, the only time Ashoke gets slightly upset with Ashima is when she does her first laundry in the US, and by accident she puts his sweaters in the dryer and shrinks them. Then there is that priceless scene when the two quietly drink their last cup of tea together, before Ashoke leaves for his teaching job in Cleveland, leaving Ashima behind in New Jersey. 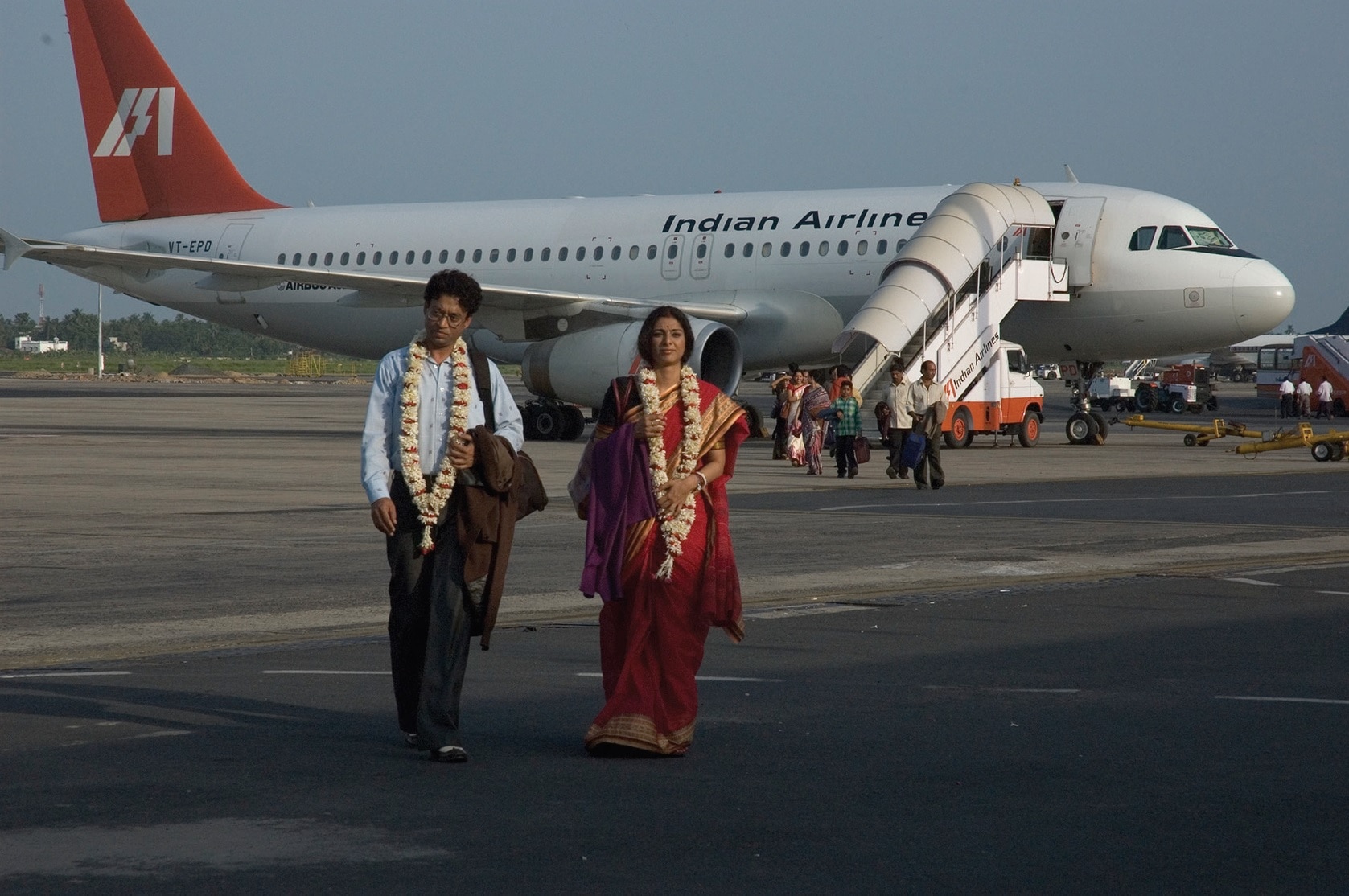 Ashoke and Ashima Ganguli (Irrfan and Tabu) when they depart for New York after their marriage in Kolkata in Mira Nair’s The Namesake (2006). (Photo courtesy: Sooni Taraporevala)

Towards the beginning of The Namesake there is a beautifully shot, delicate lovemaking scene between Ashoke and Ashima. Besides that, there are only a few times where Irrfan and Tabu’s characters actually express love for each other, but it’s all done in very quiet tones. During a trip to Calcutta, Ashoke and Ashima walk through the Victoria Memorial gardens and he asks her why she had decided to marry him. She jokes a bit, then grabs his shirt and asks, “You want me to say, ‘I love you’, like the Americans,” and briefly hides her face in his chest. And Irrfan gives the most charming, yet a tad shy smile, and simply says, “Haan (Yes).” It is a precious moment where two characters briefly reveal their vulnerable sides and actually speak out their feelings for each other. Later, during a trip to the Taj Mahal, Ashima says, “Just imagine how much Shah Jahan must have loved Mumtaz to make this for her.” To which Ashoke responds, “Other husbands also love their wives, Ashima,” and Irrfan grabs Tabu’s hand. “Only they cannot afford to build Taj Mahals.” Suddenly Gogol walks up to his parents and Ashima pulls her hand away, embarrassed.

Directing Irrfan was like working with a friend, as Mira recalls. “He could tell by looking at my face if I was happy or not with a shot,” she says. She remembers shooting one of the most beautiful scenes when Ashoke and Gogol are in a car and the father explains the significance of Nikolai Gogol to his son. “He did that scene very nicely, but I was looking at him like a puppy after that,” she says. “And he asked, ‘Kuch chahiye naa, tujhe (You need something else, right)?’ And I said, “Haan, halka sa ankh mein ansoon, magar neeche nahi ana chaiye (Yes, a slight tear in your eye, but it should not roll down your cheek).” And he said, ‘Theek hai, Mira (All right, Mira).’ I usually don’t talk to actors like this to programme their tears, especially tears that don’t fall. And that’s the scene we have from the second take. That scene required fine-tuning. It looks effortless, but I am sure it wasn’t.”

At times Irrfan would also surprise Mira, like in the scene when Gogol brings his girlfriend Maxine (Jacinda Barrett) to meet his parents for the first time. In one brief moment, the otherwise reserved and fairly conservative Ashoke Ganguly gives an appreciative once-over look to Gogol’s American girlfriend. Sooni had not written that in the script, and neither had Mira discussed anything of this sort with Irrfan. So that was all Irrfan, improvising a little humour into his otherwise serious role. “That brief touch cracked Ashoke’s dignified veneer,” Mira says. “It gave the audience a sense of his vulnerability.”

Mira also has this observation about how Irrfan takes direction. “You talk to him and you notice a quiet moment, when he just reflects on what he has to become. It was not like fatak sey (instantaneously). There is always contemplation. He’s not winning a popularity contest on the set. Tabu does it more effortlessly on the surface. She doesn’t have any acting training and it’s amazing. Irrfan does it more quietly, but he never gets it wrong.”

The Namesake shoot was the first time Irrfan visited the US. And Mira invited him to New York City during the prep time for the film and put him up in a hotel in Times Square. “He was completely like Ashoke Ganguli. He was like a beautiful child. ‘Main to study kar raha hoon yaar (I am studying everything).’” Mira also felt leaving Irrfan in the midst of Manhattan was helpful for him to get into the Ashoke Ganguli character. “We didn’t mollycoddle him, inviting him over every day,” she says. “We let him be there. Shankar the caterer was his main friend. And we wanted him to understand that alienation.” The film was a big success internationally, earning $20 million worldwide, including $13.6 million in the US alone. Western critics praised the film. Irrfan even received a significant nomination—Best Supporting Male Actor for the Independent Spirit Award.

One person, however, who was not thrilled with the film, was Irrfan’s own mother. After the  premiere of The Namesake in Bombay, where Irrfan brought his mother as a guest, he asked her what she thought of the film. His mother asked where the film’s director was. When Irrfan pointed towards Mira Nair who was standing somewhat close, his mother said, “Bula, usko, bula. Usko mera baccha hee mila tha maarne ke liye (Call her, call her. Could she only find my son to kill in the film)?” Irrfan eventually went and told Mira what his mother had said, and the director had a hearty laugh.

This is an edited excerpt from Aseem Chhabra's Irrfan Khan: The Man, The Dreamer, The Star. Excerpt featured with permission from Rupa Publications.

Do You Like This Story?
33
7
Other Stories
Please enter valid text
Must Reads
Latest Issue