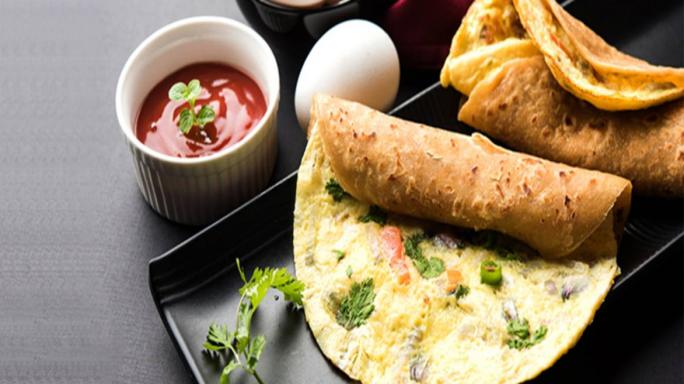 Packed with fibre, protein and vitamins, this sandwich hits all the right sweet and savoury notes.

How to: Beat an egg with a dash of milk, sugar and salt. Dip two slices of wholegrain bread in the mixture and place on a hot, lightly buttered pan. Cook on both sides until almost done. Place 1 tbsp of chunky peanut butter on a slice of bread and spread it evenly. Place half a thinly-sliced banana on top. Top with the other slice and toast on both sides until crispy.

This nutritious egg roll makes for a delicious mid-meal snack or lunchbox idea.

How to: Heat 1 tsp oil in a flat, non-stick pan. Coat a roti or paratha with a beaten egg on both sides. Place the roti on the hot pan and flip it after 30 seconds. Take 1 tbsp ketchup or pizza–pasta sauce and spread it evenly on the roti. Place 2 tbsp sautéed veggies lengthwise in the middle of the roti. Sprinkle oregano and seasoning as per taste, and top it up with some grated cheese. Fold one side of the roti on top of the other so that it sticks together to form a flat frankie. Turn the roll over and cook until it’s crispy on both sides.

Thick and creamy, this fibre-rich smoothie is a healthy substitute to sugar-laden milkshakes.

How to: Put 1 cup of mango chunks, half a banana, 1 cup yogurt (you may use Greek yogurt), 3 tbsp of mixed dry-fruit muesli (without added sugar), ¼ cup milk and ½ tbsp honey in a blender. Whizz until well-combined and smooth. Garnish with chopped mangoes and a sprig of mint. Serve chilled.