Social gatherings aren't always the easiest—but with our tips on how to keep your cool, you'll make it through to dessert in good humour 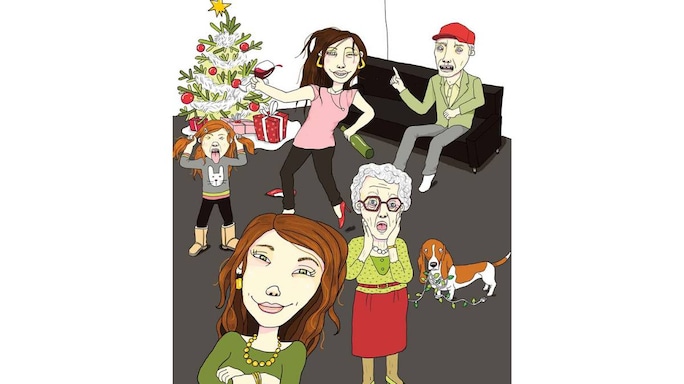 It’s time to face the facts: You may need a survival guide to make it through the festive season this year. In the 1995 film Home for the Holidays, Claudia Larson returns to her parents’ house where she is confronted by the wacky and difficult realities of family. “When you go home, do you look around and wonder, Who are these people? and Where did I even come from?” she asks.

According to Andrew Sofin, a couples and family therapist and psychotherapist, these feelings are common. “We create stories around our families,” he says. “We’ve created this idea about how families are supposed to be quite homogeneous entities. The idea is that your family should reflect who you are, so we take it personally if somebody is different.”

While many simply try to eat the pain away, there are less-fattening coping mechanisms. “First and foremost, check your expectations at the door,” says Sofin. Before attending the family Christmas dinner, write down the guest list and add two sentences next to each name: one that says what you like about the person and one that says what you dislike. “You’ll go into it with a different frame of mind,” he says. For instance, if you have an aunt who is particularly nosy, reminding yourself that she is also warm, welcoming and sweet will help you realize that her inquisitiveness stems from the heart.

While there are no hard and fast rules to etiquette, going in with a game plan can make for a winning evening. Here, we break down five of the most common difficult personalities you may share table space with this festive season. Our expert advice will help you deal with any situation with grace, dignity and compassion—or at least make it through to dessert in one piece.

We’ve all heard the saying. “Father knows best”. But whether it’s your dad, uncle, mother or pesky older sister, getting unwanted advice from a family member can trigger feelings of resentment. “Family members tend to be much more opinionated with one another than they are with strangers because of the intimacy of family life,” says Sofin. While some advice-givers may be coming from a genuine place of helpfulness, others may use this technique as a way to dominate the conversation.

Be gracious, don’t take anything too personally and remember that their intentions are good—either they really want to help or they’re simply looking for a way to communicate with you.

“Just dealing with that person might be as simple as saying ‘Thank you, I know you care about my well-being, but I’m not concerned about it at this time’,” says Jacqueline Whitmore, an etiquette expert.

It isn’t necessary to take their advice to heart, but it is important to appreciate the sentiment. “Then the other person will feel good, you’re out of the conversation and you can move on to somebody else,” adds Sofin.

The Christmas and New Year holidays mean excitement, which can take a rambunctious child’s behaviour to the next level. “A lot of the time, kids just want attention,” says Whitmore, adding that indulging them will often soften their behaviour. “Depending on the age of the child, try bringing them into the conversation,” she says.

There’s a difference between a child who is behaving badly and one whose behaviour you simply disagree with. “You might not agree with a child’s fashion statement, but stay out of it,” says Sofin. “It’s not for you to decide.” On the other hand, if a child is putting themselves or someone else in danger, tell them to stop without getting emotional and let the parents know. “If you keep calm and factual, nobody will freak out. The parents will just say ‘Hey, thank you’.” In the absence of a kids’ table, request to sit with a relative you’d like to catch up with ahead of time instead of spending an entire meal next to a troublesome tot.

Family members often know way more about us than what feels comfortable, and you may have one relative in particular who is more prying than others. When someone asks too many personal questions, keep in mind that they are likely to be genuinely interested in you and your life. “They are trying to fit in and find a way to connect with you,” says Sofin.

“If you don’t want to share a whole lot about your life, try to be as vague as possible,” says Whitmore. “Make a joke or turn the question around with another question, depending on what is asked.”

To change the subject, Whitmore recommends preparing three topics of conversation that usually go over well during the holidays: your favourite family memory, travel and food. “Everybody can relate to food and travel, but if you really want to stimulate a lively discussion, go around the table and share your fondest or funniest family memory.”

As political beliefs become more polarized, chances are, there will be someone at your next family event whose views are at odds with yours. “You don’t have to agree on everything,” says Whitmore. “In fact, I think it’s healthy to have opposing views. If everyone agreed, it wouldn’t be a stimulating discussion.”

Before getting into a discussion, remember that your family doesn’t need to share all of your beliefs, and their opinions don’t say anything negative about you. “The idea is that your family should reflect who you are, so we take it personally if somebody has a different political view,” says Sofin. “But at the end of the day, we only have power and control over ourselves.”

Depending on how heated the conversation becomes, try changing the subject or heading to another room, with or without that person. “Sometimes, with this person, you might have to say, ‘You know, we’re just going to have to agree to disagree on that issue,’” says Whitmore.

At best, someone who overdoes it on the Pinot might cause embarrassment; at worst, they could be a threat to themselves and others. If you’re hosting the dinner, remember that you’re responsible for your guests. “If you see that somebody is getting out of control, pull them aside privately,” says Whitmore. Keep in mind that there’s usually a motive for overindulging, and it could very well be the same social anxiety that you’re feeling. “There’s a reason why alcohol is a multi-trillion-dollar industry,” says ­Sofin. “It’s a depressant. It calms people down and makes them less anxious and less stressed.”

As the host, you can minimize damage by no longer serving your unruly guest and keeping plenty of water, non-alcoholic beverages and food readily available. Also, ask yourself why someone might be drinking. “Are they worried because their ex is here?” asks Sofin. “Did they just find out that they owe hundreds of thousands in taxes?”

Engaging with your overindulging guest in a non-confrontational way may bring their troubles to the surface, which can have a calming effect. But keep in mind that it’s not your job to play family psychologist or party-police officer. Offering to call a taxi or letting your guest spend the night will suffice.