How to Look at the Bright Side 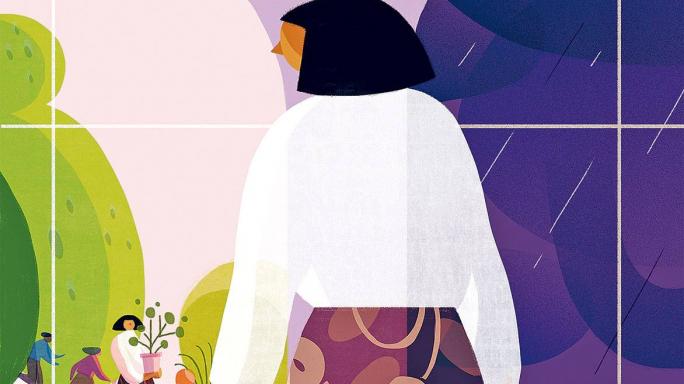 As an undergraduate in his early 20s, Christopher McKinnon often attended political protests. In 1999 and the early 2000s, he went to rallies in Toronto, Canada, in support of anti-globalization actions worldwide, such as the World Trade Organization protests in Seattle. Instead of being filled with hope by these actions, however, after a few years he became skeptical when he saw what little progress was being made both in the political sphere and within his own communities.

“I realized people weren’t really approaching the issues with a deep level of analysis; they were just arguing and fighting,” he says. “I felt powerless and thought, ‘I can’t possibly change anything. The world is just a mess.’”

It’s understandable that one could view humanity as being on an irreversibly wrong path. News headlines are dominated by school shootings, rising climate change, threats to democratic institutions, economic and racial inequality and violence against women, children and minorities.

If anything is guaranteed to make things worse, however, it’s checking out and giving up. Thankfully, there are ways to keep caring and even maintain a positive outlook.

According to the 2018 Edelman Trust Barometer Global Report, public trust in institutions such as governments, corporations and NGOs is down by an aggregate of 13 percentage points compared to 2017. Trust in the media saw the steepest decline—five per cent lower than last year.

Similar surveys in the United States conducted by Gallup, a global analytics company headquartered in Washington D.C., show that trust in institutions such as government and the medical system has been declining precipitously, starting from the 1970s.

But as McKinnon’s story shows, gloominess about the state of the world can actually be a sign that you have—or had—high standards for something you care about and you’ve become discouraged.

According to David Mazella, author of The Making of Modern Cynicism, the term ‘cynic’ was used in exactly this way in ancient Greece, where a person was described as such if they believed in “the autonomy of the self and the ability to be moral no matter how corrupt things become around you”.

Feeling cynical, Mazella argues, is useful if it allows us to identify where a situation isn’t aligned with our values—especially if it “helps you slow down to see if you can verify and believe what you’re getting told”, he says.

The next step is to avoid letting this new awareness get you so down that you’re paralyzed. Instead, you should recognize it as the first move towards solving the problem.

Focus on the positive

Some who succumb to negative expectations do so because they think that constantly preparing for the worst insulates them against it. Research has shown that the opposite may be true, however. In 2014, a study by University of Eastern Finland reported that agreeing with statements such as “it’s safer to trust nobody” correlated with being almost three times more likely to develop dementia. And two years later, researchers at the University of Cologne in Germany discovered that after nine years of holding cynical views, people earned 230 euros (Rs 18,450) less per month.

“Focussing on bad news can become a self-fulfilling prophecy,” agrees David Richard Boyd, author of The Optimistic Environmentalist. “It really does make your health worse, and lead to less success and taking less action.”

Working in Canadian environmental law for over two decades had left Boyd depressed and hardened about the planet’s future. But with the help of his daughter, he discovered the benefit of deliberately seeking good news.

Five years ago, the then-seven-year-old Meredith came off the school bus crying, saying she had learnt that global warming was causing certain species—including her favourite, polar bears—to go extinct. “To see your own child in tears because of bad news about the environment is like being stabbed in the chest with a dull knife,” says Boyd. He told her that while that was true, some species, such as sea otters, had been brought back from the brink of extinction by conservation efforts.

From there, he began what he calls “a real journey of hope”, seeking similarly inspiring stories that included improvements outside his field—from the rise in literacy worldwide to the falling global maternal mortality rate. The unheralded boom in green energy affected him the most. “I absolutely think we’re going to make it,” he says. “I think we’re in the early stages of turning the ship around.”

While news organizations tend to lead with the bad, balance can be found if you look for it. “The great thing about optimism is it’s not something you’re born with or without,” says Boyd. “It can be cultivated.”

One easy way to escape the negative news feedback loop is to volunteer in your community. Doing good, even on a small scale, can dramatically transform your outlook.

When 30-year-old designer Kartik Gera was diagnosed with type 1 diabetes six years ago, he felt anger and despair. “I realized pretty quickly that I would never be able to live a normal life. Every day was about staying alert, prepared and mindful. The constant self-policing was exhausting, but the loneliness was worse. My family and friends tried, but they just couldn’t understand what I was going through.”

Eventually Gera came across Beyond Type 1, an international non-profit that provides resources and support for people with this incurable autoimmune disease, and found the kind of support and advice from other type-1s that doctors or well-wishers couldn’t provide. More importantly, he found a higher calling in helping others with the same condition understand and manage their illness.

Managing type 1 can be a complicated, expensive and tiresome task. “I met so many people who chose to ignore the symptoms either because they didn’t know better or couldn’t afford the treatment.” Being part of something bigger—an organized effort to raise awareness and educate people, as well as fight for policy change to make medication more easily available to all—helped him focus on more than just his own troubles. “It takes a toll with a full-time job and family commitments, but it’s worth the effort, no matter how small,” he says.

McKinnon, now in his 30s, says his own about-turn began about 13 years ago when he was managing volunteers at the Toronto Inter-national Film Festival. There, he witnessed his charges finding meaning in helping others, and ended up doing so himself. When he taught one elderly volunteer how to use the internet and set up her first email account, she later came to the office proudly showing off pictures of her grandchildren that had been sent to her. “I found value in realizing I could be helpful,” he says. “It didn’t need to be big. Even the little things could be powerful.”

These days, McKinnon even has a more optimistic opinion of the politicians he once distrusted. “People in power are just like us,” he says. “There’s a capacity inside of everyone to be good and make a difference, to look around you and say, ‘The world is not the way that it should be. I can be a part of that change.’”