Saffron Is The 'Sunshine Spice' You Need 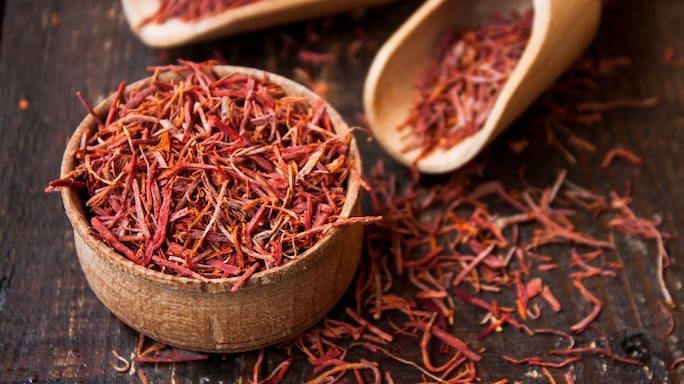 Saffron, a versatile spice, is produced from the dried stigmas of crocus sativus, also known as the saffron crocus. An estimated 75,000 blossoms are required to make a single pound of the spice. Considered one of the most expensive spices in the world, cultivating and harvesting saffron requires a lot of effort.

It is rich in antioxidant compounds and, therefore, has medicinal properties. It can be used to treat conditions such as asthma and whooping cough. It is anti-inflammatory and is good for the gastrointestinal system as well. Research has also found that saffron can help in the treatment of sleep disorders and improve its quality.

The distinct aroma of saffron can be attributed to safranal, a chemical that has also been shown to fight depression and anxiety.

From orange to yellow, saffron can endow a rich colour and flavour to the cuisine in which it is used. Depending on the amount used, the fragrance from such dishes can range from mild to overpowering.

Saffron, or kesar/zafran (as it is known), is popularly used in dishes such as biryani where it needs to be soaked thoroughly before being added. You can use a generous amount of the spice to add flavour to milk, kheer or sweets too.

Saffron extracts are also used in the production of scents, perfumes, body lotions and oils. It is also used in face creams and face packs to help you get a glowing skin. The extract from the saffron flower is also used to dye clothes.

A number of studies have shown positive effects of saffron in the treatment of dementia and Alzheimer’s disease. It has also been seen that it boosts memory and learning processes in individuals suffering from such ailments.