Pesto: The 'Green' You Wouldn't Mind Having In Your Dish 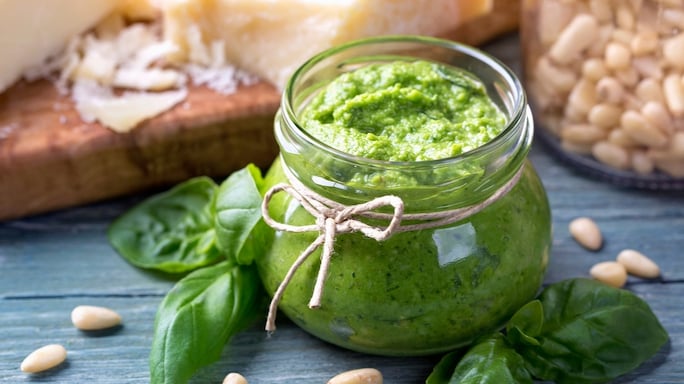 You may recognize pesto sauce because of its characteristic green colour. It is more than a simple sauce, though, and is, in fact, one of the most versatile kitchen ingredients.

A mainstay in Italian cuisine, pesto has several variants, one of the most popular of which is the pesto genovese (the Genovese variety). It has become a popular household item worldwide because of its several uses:

The history of pesto

A predecessor of the modern pesto sauce is the agliata, a garlic sauce dating back possibly to the Roman times. However, the first recorded recipe of Genovese pesto can be traced to a late 19th-century cookbook, La Cuciniera Genovese, by Giovanni Battista Ratto. The popularity of the sauce has been such that it has remained one of Genoa’s greatest exports to date.

The best thing about pesto is that you can make it with a variety of ingredients, nearly all of which have substitutes you can experiment with.

1. Leaves and greens: A traditional pesto genevese recipe recommends the use of fresh basil leaves. However, you can also opt for other greens such as cilantro, dill, oregano, mint, parsley, sorrel, spinach, among many others. Should they have a wooden stem, make sure to remove it.

2. Nuts: Here too, you can choose between several options: Pine nuts and less-expensive options such as walnuts and almonds work well, among others. Should you have a nut allergy you can go without nuts.

3. Cheese: You can experiment with a number of varieties, such as Parmesan, Gouda, cotija, among others. However, you should make sure that it is fresh; you would also do well to steer clear of wet, soft varieties such as mozzarella.

4. Oil: You could go with olive oil, avocado, grapeseed or canola, even though the flavour may vary slightly in each case. However, do make sure that the oil’s flavour doesn’t clash with the taste of the bases comprising the sauce.

Pesto resso is another variety of pesto, apart from pesto genovese, that uses sun-dried tomatoes and almonds. Other regional versions in South Italy use ingredients such as red peppers or cherry tomatoes. The nutless version of the paste is called pistou.

Whatever may be the variety, for the best texture and flavour, use a mortar and pestle instead of a food processor to make it.

If you don’t have the time to make pesto at home, you can  easily buy a bottle from the supermarket or an online store. Make sure to stir it well before use.