How couples can improve their listening skills 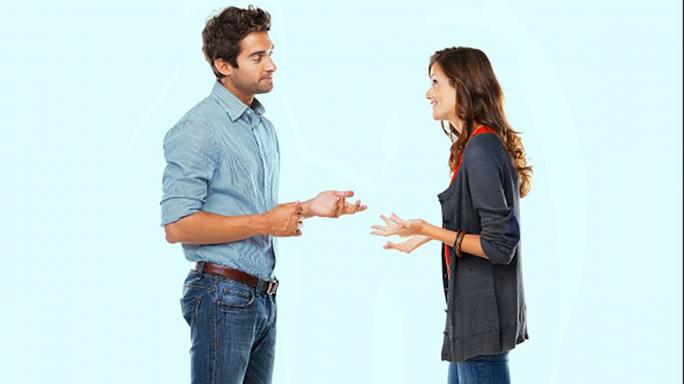 Five years ago, Shruti Malhotra*, a 31-year-old from Delhi, met a relationship mediator to work on some stressful communications issues she had with Sagar*, 31, her husband. The couple had been dating for seven years before marrying in 2009. “I never imagined our relationship would hit a low. It became hard to put forward a point without getting into an argument,” says Shruti.

“I thought it best to seek help from a third person who’d focus on our problem without getting emotionally involved,” she says. At first, Shruti attended the sessions alone; Sagar joined in two years later. Their sessions taught them to react more calmly, listen more openly and understand each other better. “They helped [the sessions] bring us closer,” says Shruti.

When you’ve got something to say, you want your partner to hang on to your every word. But often, it can feel like you’re being tuned out, especially if you’ve shared decades’ worth of mundane exchanges. And as much as you’d like to believe that you’re an ideal listener, you’re probably just as guilty of neglecting your partner.

“I think there’s a great hunger to be heard,” says Helen Ralston, chair of the International Listening Association’s business committee, who does her research near Oxford. “We’ve got the equipment to do it; most of us have two ears, a mind and a heart. And if there’s a great hunger to be heard, this suggests there’s very little real listening going on. Instead of listening, we are more likely to be waiting to offer our own point of view. Chennai-based psychiatrist Dr Vijay Nagaswami has seen this often in his practice. “We all have the need to be heard, not to hear out others,” he says.

Globally, the average person spends between 45 and 70 per cent of the day listening to others. But within each 24-hour period, you have very little quality time with your partner. Most couples converse meaningfully for an average of nine minutes each day. If you’re too distracted, you’ll miss more than today’s gossip; you could miss subtle hints about how your partner is feeling, which could bring you closer. Sadly, many of us miss these opportunities to connect.

“Unlike reading, we usually don’t get any proper education in listening reception, even though this is the kind of communication we use most frequently,” says author Kent Adelmann, professor and listening researcher at Malmö University in Sweden. You can learn to listen more intently and make your partner feel appreciated, not overlooked. Here’s how:

Focus on the moment

It’s natural for your mind to wander during a conversation, especially when it gets repetitive over time. But if you’re aware of this, it’s easier to combat the tendency. Part of the problem is that people listen faster than they speak.

But as Mumbai psychologist Dr Shalini Anant points out, we have forgotten to ask our partner basic things, such as ‘How was your day?’ ‘Did you sleep well last night?’ ‘How are you feeling?’

“While most couples complain that they are not being heard, very few make time for each other. We are either busy with our smartphones, working to keep a deadline or looking after our children,” she says.

One important step that many people overlook: If you realize that you can’t listen when your partner approaches you, be honest and schedule time to speak later. Then turn off the TV, put down your smartphone and sit together. These simple actions show that you respect your partner and are devoted to hearing them.

“The partner, in adult life, is the most important attachment figure,” says European Association for Psychotherapy spokesperson Annette Kreuz, a clinical psychologist who does couples therapy in Valencia, Spain. “He or she should be a secure base, and that means we have to make space and time to really listen to one another.”

“The early stage of a relationship is driven by curiosity,” says Dr Maitri Chand, Delhi-based marriage and family therapist. “This is when a couple share their innermost thoughts and feelings with each other.” But over time, as partners gradually take each other for granted, conversation often suffers; the listening isn’t intent, as it once was. The laid-back conversation gradually diminishes and is replaced with one that’s more functional in nature. Eventually, other tasks take precedence and ‘couple time’ takes a back seat. “What happens at the very start of the relationship is how it should go on,” Kreuz says. “At first, we want to be sure of everything they say: what they like and don’t like. But in relationships, especially long-lasting ones, people think they already know what the partner will say.”

Have you ever finished your partner’s sentence? Whether or not you’ve predicted correctly, you’re tuning them out, which makes them less likely to share. “Interrupting is not helpful; it stems from impatience,” says author Michael Nichols of Virginia. “The problem is, we’re not usually that interested in hearing them out. We’re waiting to say what we want to say. We interrupt and say, ‘Oh yes, I understand.’ We respond by telling our story. Those are mistakes.”

“People also tend to use the words ‘understand’ and ‘listen’ interchangeably with ‘accept’ and ‘agree’. These should to be kept separate,” suggests Chand. “Remember you may understand what your partner is saying and where they are coming from, but your own take on the matter could be different from theirs.”

When your partner asks you to listen, be conscious of when you speak and what you say.

“Very often, people don’t know when they’re interrupting,” Ralston says. “During my research, I record conversations. Afterwards, when people hear the recordings, they are horrified at how often they have interrupted—they didn’t know they were doing it.”

If you happen to perceive that your partner is about to criticize or blame you for something, you are eager to offer a rebuttal or take a stand without allowing the person to complete. “If I felt Shruti was about to bring up something that’s not likely to go down well with me, I’d stop her mid-sentence,” says Sagar. “Rather than hearing her out completely, I’d assume things and restrict our conversation.” Being aware has helped Sagar make an effort to refrain from interrupting Shruti.

When your partner shares something meaningful, listen. Don’t give advice, share your opinion or recount anecdotes. “If you are the one talking, try to speak concisely and avoid making too many points at once. If you tend to be verbose, things are often lost in perception and interpretations,” explains Chand. “The person who’s listening should make an attempt to show if they’ve heard correctly and have understood what’s being conveyed.”

Many people give advice, but refrain unless your partner specifically requests feedback. Psychologists have found that while most women want to be heard and empathized with, men look for and offer suggestions. “We sometimes assume other people want advice when, actually, they want someone to listen,” Ralston says. “Often, when we have the opportunity to talk to someone who listens, we find that the best listener enables us to listen to ourselves,” she adds.

It’s hard to have a meaningful relationship without occasionally arguing, but listening during arguments is challenging for most people. Through such interaction we seldom offer what our partner needs. “Most communication issues between spouses have to do with accusatory conversations, blame games and a lack of understanding what the partner wants to express,” says Nagaswami. As a result, both partners don’t feel understood by the other and the gap that resulted in the conflict invariably widens at the end of the conversation.

“Each partner has the opinion that their attitude, needs and view of the situation are right and that one needs to convince the other,” says Guy Bodenmann, professor of clinical psychology at the University of Zürich. “Relationship conflicts are important, like the salt in the soup. It’s important that couples fight with each other, but in an appropriate, respectful way.”

Discuss touchy issues when you’ve had time to calm down. Research suggests that both men and women tend to ‘stonewall’—withdraw from an interaction by getting quiet or shutting down. Also, while women are more likely to begin a discussion with a ‘harsh start-up’—one that leads off with criticism, sarcasm or contempt—men often dislike being challenged or influenced in a relationship.

“It is unlikely you’d come to conclusions unless both partners are in a rational space,” warns Nagaswami. “So the first thing to do is calm down. If you hasten the making up, you are likely to do an incomplete job.” Take some time out to think appropriately before you re-engage. Consider putting across your point differently, by reframing or rewording your sentences, advises Chand.

According to experts, couples in India, who come in for therapy to work on their communication skills, rarely have an issue with their communication alone. Partners tend to tell each other how much they don’t like or respect the other. When the matter is probed further, a lot more emerges. Issues such as mental illness, emotional disconnect, infidelity, anxieties, insecurities and family conflicts are often revealed.

Also, talking about your feelings may help you both listen more intently. “That is often new for the couples: that under the anger and frustration is a lot of vulnerability, because they haven’t experienced a vulnerable partner,” Simon says. “When they get it, it’s interesting to watch how much easier they can de-escalate so they can listen better.”

If you’re sharing exciting news or expressing disgust and you’re met with indifference, it can make you feel like you don’t matter. When the tables are turned, put yourself in your partner’s shoes and listen fully so you can react appropriately. “Listening is a part of gaining perspective, and this can happen through keen observation,” says Anant. “It is vital that you understand and acknowledge the feelings of your partner to empathize with him or her.”

“The more the speaker is talking about his/her inner world (why something is difficult and painful for him/ her), the easier it is to engage in empathy,” Bodenmann says.

Your non-verbal reaction can be just as important as anything that you say.  “An open body language, gentle nods, subtle grunts and eye contact reflect you are listening attentively,” suggests Chand. “It’s important that you honour your partner’s words, whether you agree with them or not.” Adds professor Adelmann: “It is never enough to tell somebody about your intellectual understanding, but you also have to show your emotional understanding. A tear in your eyes or your hand on my shoulder express often more than words.”

Leave your ego at the door

Want to be a better listener? Ask for help. “Show that you understand by asking your partner, ‘Let me see if I heard you right?’ and repeating what you heard,” suggests Chand. “You will then learn if they meant something else.” If you’re very talkative, your partner may have trouble getting a word in. Encourage them to talk more, and really listen.

Offer an apology if you mean it and not as a justification. “Sometimes people apologize to end a conflict,” says Nagaswami, “but then, deeper issues rarely get addressed and the conflict remains, to rear its head on another occasion.” Finding humour in an argument is equally important. “Team up with your partner to beat the awkwardness out of a situation,” suggests Chand. “Communication happens in small bits and bytes but has a long-standing impact. So, even a few meaningful moments will set things right.”

“Wish we had started therapy earlier, but we know we are on the right track now,” says Shruti.

“I can see things improving and my husband feels the same too. The process requires patience. But we are learning to be more compassionate towards each other. We can now listen attentively without being judgemental,” she says.

Do You Like This Story?
11
1
Other Stories
Please enter valid text
Must Reads
Latest Issue