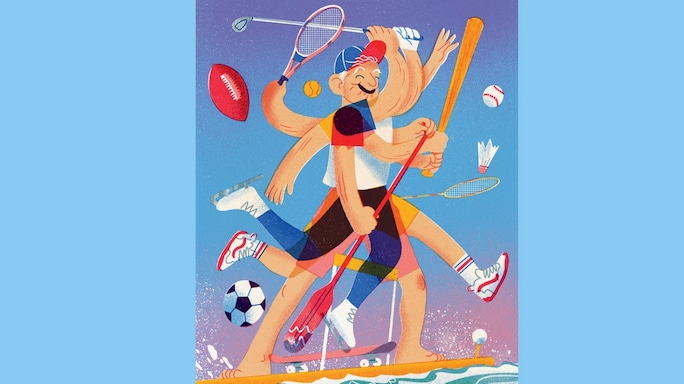 CALL IT A GEEZER crisis. An old man grasping for a semblance of youth. A hare-brained scheme that would almost certainly end in lack of dignity or, even worse, serious injury. But on my 70thbirthday, in September 2019, I decided to participate in 70 different sports before I turned 71.The motivation? Simply to have some fun.

I had played sports as a youngster and never stopped. I live in Winnipeg and skating, curling,slow-pitch softball and the odd game of golf have long been part of my annual routine. So while it might sound like hubris, I was confident that 70 sports in one year was well within my reach.

To qualify as a sport, the endeavour would require at least some of the following: agility,strength, hand–eye coordination, or it at least had to leave me huffing and puffing. That obviously eliminated competitions such as poker, chess or hotdog-eating. My goal was not to master any of the sports, but to just give them a whirl.

Athleticism, after all, does not end at some arbitrary age. In every one of these activities, there are people much older than me who can play the game at a level I could never hope to achieve. ‘Try anything once’ was my motto, then move on.

THE LACK-OF-DIGNITY BIT came early.Shortly after my 70th birthday, I took a crack at paddleboarding. Not a confidence builder! Family members were greatly entertained watching me first try to get on the damned board, then stand on the board and finally fall into the water before trying all over again.Lesson learnt: perseverance pays off. Eventually I stood, I balanced and I paddled. An early success.

Winter sports brought their own challenges. A pick-up game of hockey resulted in the odd collision. The old lads I was playing with couldn’t always stop. The quality of play was hardly inspirational, but it was certainly fun.Then came the attempt to teach myself the basics of figure skating. They made it look so easy on YouTube. But attempting a simple spin left me prostrate on the ice, my elbow and knee throbbing. I refused to give up. Some might call it stubbornness; I preferred self-discipline. If at first you don’t succeed, try, try again. In this case, I learnt the rudiments of the sport—enough to do a very short programme—and performed it for my wife and anyone else who happened to be around at the community club.

I hadn’t been downhill skiing since my early 20s, so, when it came time to try, I willed myself not to fall. I didn’t,but admittedly there was a tinge of terror as I headed down the slope the first time, even though it was only a bunny hill carved out of the Red River Floodway. That glorious soft March evening was capped by a beautiful Prairie sunset. A touch of paradise.

Checking off skiing and skateboarding.

A FEW DAYS AFTER my skiing adventure, the pandemic shut down most of Manitoba. COVID-19 proved to be a significant setback to my 70-at-70 goal. By then I had tried nearly 35 sports,including kayaking, badminton, skating and even some acrobatics on the trampoline. With virtually all sports facilities locked down, it became evident I would have to resort to my own devices if I were to keep going.

Individual sports would have to be the order of the day: running, jumping,walking. For track, I built my own high jump and hurdles. I even came up with my own version of the Scottish Highland games, tossing a makeshift caber and shot-putting a stone found in a ditch. Athletics does not have to be complicated.

Two and a half months later,Manitoba began to reopen, allowing travel to sports facilities in various parts of the province. I added pickleball and horseshoes to my list during a visit to Riding Mountain National Park; hillclimbing in the beautiful Pembina Valley and swimming in Lake Winnipeg. On my little adventure, I also stumbled across Manitoba’s own field of dreams. Friedensfeld has no post office, no shops and only a handful of houses. However, cut from the corner of a farm field is a pristine baseball facility with green grass, floodlights and stands for the fans. It’s surrounded by (what else?) a field of corn. Of course, I grabbed a bat.

MY FAMILY’S SUPPORT was essential.My wife was on hand to photograph every event and even participated in a couple of sports so I could check them off my list. My three sons were always ready for a spirited game of something.Dodgeball, tug-of-war and beach volley ball brought the whole family together. One of the most memorable experiences was taking my nine-year-old granddaughter on her first trail ride.Being a history buff provided an extra dimension. Evidence of sporting activity can be traced almost to the beginning of human activity.

Skating has a patron saint, a form of hockey was played in ancient Greece, and Mary Queen of Scots is rumoured to have once shocked her courtiers by showing up to play tennis wearing pants. Every sport has its story.

There were some health advantages,too, to all the exercise I was getting.Each activity triggered endorphins that brought an immediate, if short-lived,high. Over the longer term came the realization that dreams are important,regardless of how far-fetched or unrealistic they might seem. As youngsters we dream of playing in the National Hockey League, hitting a home run at Yankee Stadium or participating in the Olympics. As we age, our hopes and dreams change, but one should never let them disappear. We need something to look forward to; what’s better than to wake up each morning knowing there is a game to play?