How To Get The Best Out Of Ghee

A spot of this fat can be sublime, only if you buy right. 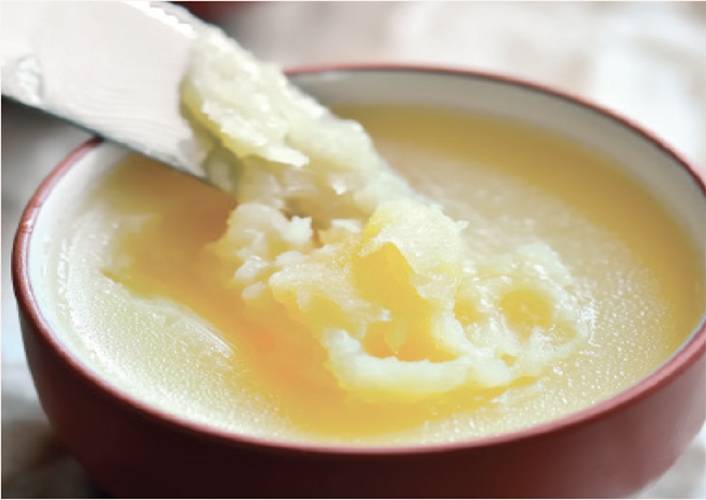 HERE'S ghee and then there's organic ghee. The latter was pulled from the brink of extinction by org-anic dairy farming groups. What's the difference, you may ask. Ghee is India's safest method of consuming milk fat. But not every ghee brand is reliable. A product is only as good as its source, or the materials it is made from. You can't get good ghee from the milk of cows or buffaloes that have been pumped with growth hormones and antibiotics. Then there are cows that are injected with oxytocin or pitocin at milking time, or given feed or grasses contaminated with chemical pesticides. Milk treated with hydrogen peroxide or other chemicals (to make it last longer) will not give good ghee either.

The worry is we are feeding our cows cotton seed cake that is made from genetically modified cotton plants. Since milk has become expensive over the years, there is a thriving industry now that manufactures ghee directly from animal fat. Unbelievable, but true. Sure, you can get ghee, but not good ghee. The best dairy ghee can only come from the milk of cows fed naturally, with feed coming from assured, organic fields or pastures. That is indeed a tall order. The only animals that produce such milk are those that graze freely in the village commons, or are part of Maldari [cattle-herders] herds and cow shelters (goshala).

Before chemicals invaded agricultural fields in the late 1960s, almost all ghee produced in India was safe. Now everyone wants good ghee back. Sources? Go for Indian organic brands available in reputable grocery or health stores. Good organic ghee costs around `1,000 per kg. The best now cost around `2,500 per kg, but are used mostly for medical purposes.

You can also make your own at home to ensure that the ghee you consume is made from milk fat right in front of your eyes.

My wife, who is a high court advocate, makes ghee as often as possible. You can always follow her example: Make sure you accumulate dairy cream in a separate container in the fridge, as and when it is available, or in surplus. Add a spoonful of curd to the cream stock. After a certain quantity has been collected, wash or churn it several times (an egg beater does this job quite quickly), so the fat collects at the surface and can be easily removed. Place the butter on a slow fire to evaporate the remaining water and separate the dairy solids from the fat. This simple process is known as 'clarifying butter'.

This is not done to conventional butter, which ends up giving you a spate of heart and other health problems. The resulting liquid-ghee, clear yellow and with a wonderful aroma-is then strained before it cools. The ghee made using this simple method will now remain for more than a year without refrigeration. It can be used for almost everything (including the occasional deep-frying) as it has a high smoking point. Since the milk solids have also been removed, it will not burn or leave any residue.

However, remember that traditional wisdom never advocated copious consumption of oils and fats that were traditionally associated with affluence (butter was unknown). Ghee was always expensive. It remains expensive. That is an advantage, encouraging us to use it only in small quantities. If you get a good supply of organic ghee, consider it better than gold.