All That's Good About Ghee 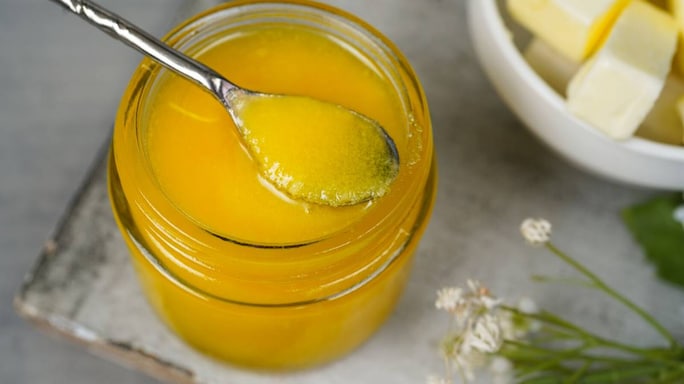 Considered one of the healthiest sources of edible fat, ghee had fallen from grace, drawing heavy flak in the past for the higher incidence of coronary artery disease in India. However, current know-how echoes the tenets of Ayurveda that has recommended ghee for its healing and therapeutic properties and still considers it a better cooking medium compared to other oils. It’s likely that your grandmother used ghee to cook food⁠—and so should you. Here’s why.

1. Research has revealed that coronary heart diseases in India have spiked only in the last two to three decades. This has been attributed to the fact that in most households, traditional fats such as ghee and mustard oil were replaced by oils rich in linoleic, arachidonic acid and trans-fatty acids. Unlike other mediums, ghee or clarified butter is low in polyunsaturated fatty acids (PUFAs) such as linoleic acid and arachidonic acid, which makes it safer to consume.

A study, published in the Journal of the Indian Medical Association, on the rural population of Rajasthan showed “a significantly lower prevalence of coronary heart disease in men who consumed higher amounts of ghee.”Another report published in the journal Ayu states that “High doses of medicated ghee decreased serum cholesterol, triglycerides, phospholipids, and cholesterol esters in psoriasis patients. There were significant improvements in the patients’ psoriasis symptoms as well.”

2. According to Ayurveda, ghee aids digestion and improves the absorption and assimilation of nutrients. It not only promotes longevity and protects the body from various diseases but also strengthens the brain and nervous system and improves memory. The daily intake of ghee can help strengthen your bones and make your body more flexible because it helps lubricate the connective tissues. Packed with a host of essential minerals and vitamins such as A, D, E and K, ghee improves and boosts the immune system.

3. For a therapeutic spice, herb or ingredient to work, it’s essential that it gets properly digested and absorbed in the body, and this is where ghee comes in. “It is an excellent Anupana (therapeutic vehicle) for transporting the properties of herbs to the deeper tissue layers of the body. […] The lipophilic action of ghee facilitates transportation to the target organ and final delivery inside the cell via the cell membrane, which also contains lipid,” as per Hari Sharma, H.M. Chandola in the book Bioactive Nutraceuticals and Dietary Supplements in Neurological and Brain Disease, 2015.

4. Known for its anti-inflammatory and healing properties, ghee has been used in Ayurveda for centuries for treating a host of skin ailments. A clinical study in psoriasis patients showed that medicated ghee led to a marked reduction in scaling, erythema, pruritus and itching, as well as an improvement in the overall appearance of the skin.

Note: Even if you’re fit and healthy, like all fats, ghee too is high in calories. So be mindful of how much you consume every day. Just a little bit of ghee every day can go a long way in improving your overall health and well-being.