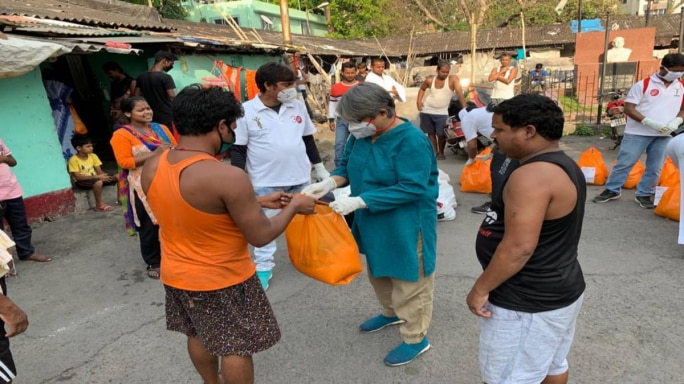 Future Hope, a Kolkata-based non-profit, has been providing the opportunity for a better life to thousands of children living on the streets of the city, through access to homes, education, and livelihood opportunities for more than 30 years now. In the wake of the nationwide lockdown, due to the coronavirus, the non-profit had no choice but to look beyond their work with children, well beyond the 300 studying in its school, and the 130 living in its six homes, to serve the wider community.

"Many of our students are day-scholars who live with their parents. All of them (the parents) are now without jobs as they were daily wage labourers. Initially we wanted to aid our students, but looking at the desperate situation, we decided to extend our support to their families and beyond," says Sujata Sen, the CEO of Future Hope.

With one of its trustees, the Maheswari Foundation and an independent organisation the Magma Foundation, coming forward with funds, a plan was put in place to reach out to more than 2,000 families in various parts of Kolkata, including Ballygunge, Dhakuria, and Sonagachi. The goal was to provide them with dry rations, consisting of rice, flour, pulses, masalas, tea, onions, potatoes, among others. "Each kit cost us around ₹800, and we packed and distributed them with the help of our students in the senior classes," says Sen.

The NGO did not limit itself to distributing the kits only among those it served initially. "We sought the help of the police and the councillor in our area to identify the really vulnerable families living in the slums so our rations could reach them," Sen says. Future Hope has completed two rounds of distribution already and will now start the third one soon with the help of other supporters. "We want to reach out to as many vulnerable families as possible and we will continue our efforts as long as it is needed," says Sen. Although governments are claiming that they are distributing free rations, Sen notes that the public distribution system is not functioning with the requisite efficiency at this time.

Future Hope was founded by the British national Tim Grandage, who came to India as a bank manager in Kolkata, more than 30 years ago. His vision was to provide food and a home to the children living on the streets. Future Hope, which runs a school of the same name, now provides free education from the kindergarten to the college levels to street children. It also runs a skills-training programme in Barrackpore, a suburb of Kolkata.

"What we are doing during the lockdown is very much in keeping with our founder's vision of helping the most vulnerable. We aspire to continue on this path," says Sen.