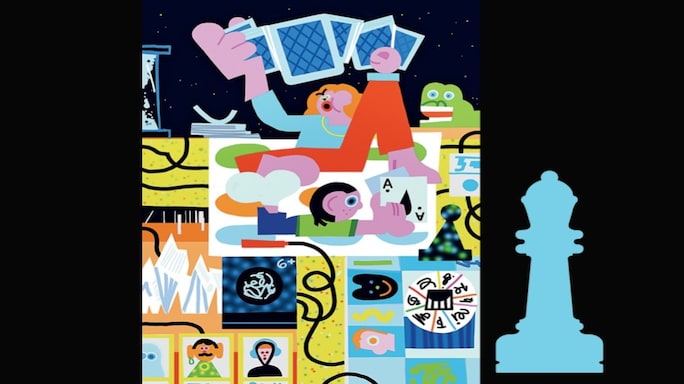 My son, a six-year-old boy in a dinosaur T-shirt, sits across from me in front of a chessboard that once belonged to his great grandfather. He’s holding a plastic knight in his little hand and humming quietly to himself as he debates his next move with the intensity of a chess master in his prime. His eight-year-old sister watches carefully. She’sgoing to play the winner, so she wants to know what she’s up against. As with any serious chess match, an episode of Wild Kratts, an animal show for kids, plays on a nearby TV.

My son turns his head towards the TV and then back again. “Did you know that hippos can’t really swim?” he offers casually. The knight moves, and he takes one of my pieces. Dammit.And wait, how is that possible about hippos? How long can they hold their breath, and what happens when they sink? Are hippo drownings an issue I've never known about? Our game carries on, neck and neck, the Kratt brothers continuing their impossible adventure in the background.

When I play a board game with my children, I want to win. It doesn’t matter if it’s cards or Monopoly or the children’s version of The Settlers of Catan—I’ll happily destroy them. I did not go through pregnancy and birth two humans just so I could pretend to be bad at chess. I mean, I’m not particularly good at chess, either, but I'm still going to try my best.

If they make a bad move, I let them make it. I’ll clearly explain the rules of the game, but if they fall into a trap because they weren’t paying attention,so be it—better luck next time. I love a good board game and I love my kids,and I respect them too much to treat them like delicate flowers who will wilt in the face of defeat. I’m playing to win,and they’re doing the same.

Failure has an important role in childhood development and building resilience. When I take them down in Clue, I’m teaching them that it takes practice and effort to succeed. Also, I’m showing them that Mommy excels at murder-themed games.

This isn’t just my competitive streak in action—I also need to engage fully rather than watering myself down in the name of being a mom. If I sit there with my kids, letting them beat me at checkers again and again just so they feel good about themselves, I’m doing them no favours. I’m not doing myself any favours, either. I’d be performing a routine, one where I’m a playmate, not a whole person—a prop, rather than a human being with motivation and skills. I’d be bored.

My son makes his bishop do a little dance, commenting on how many of my pawns he’s taken. I move my rook and exact my revenge. “Dammit!” my child mutters under his breath.Because he is six years old, I remind him not to curse, but I’m secretly amused. We eye each other’s pieces,trying to anticipate next moves. His sister has wandered off to find a snack.

I love these times with my children,casually sprawled around the ottoman in the living room. We laugh, we get mildly frustrated when the game isn’t going our way, we chirp at each other and have fun. The competition is real,but each battle ends with a friendly“good game,” and then my children immediately request one more round.This is how we manage the after-school lull or find quiet moments on a lazy Sunday afternoon. It’s close to paradise.

So much of my life is spent with my children, nurturing their interests and abilities. I happily bake with them, sit and draw pictures, take them hiking,show them how to pick herbs or plant flowers in the garden, play tetherball in the backyard or I read them endless stories. But I’m no good at playing dolls or pretending to be a pirate. I lack the ability to get lost in any imaginative game in which I have to be a character or, even worse, an animal.

Games, however, are where I feel at ease. They differ from other types of play-based interaction because they’re a dedicated task for my brain. I can sip a coffee while I look my kid in the eye, capture his piece with no remorse,then watch him jump up in glee when he figures out a countermove. High fives all around.

That said, the only thing that outweighs my desire to win is my pride in having happy, smart, capable children. I’m thrilled when they do beat me. It’s no different than seeing your kid fare well on their report card or score a goal in soccer—they’re succeeding, and it feels good. It may not be a milestone you note in a baby book,but when your children beat you and your partner in Pictionary for the first or the 50th time, it feels like you’ve done something right.

For years, I felt guilty about being the type of parent who begrudgingly gave horsey rides and was always quick to suggest that Daddy does them better.I didn’t give myself nearly enough credit for all the love and attention I gave to my kids because I felt so bad about the handful of things I wasn’t good at or didn’t do. Some families bond over sports or Lego, while others play backgammon. The love comes through, no matter what your quality time looks like—even if it’s a semi-intense game of chess.

My son usually takes the win these days. He’s mastered the art of playing well while half-watching a cartoon.He’ll hover a hand over his king, his eyes wandering towards the TV as he spouts a random biology fact. The more he does this, the more distracted I get,and yet he always seems to be two moves ahead. “Got you, Mama,” he'll say triumphantly, slamming his player down as he closes in on my king. “I got you so good. Can we play again?”

We eventually run out of game time,with dinners and homework and bedtimes always on the horizon,but tomorrow, or the day after, my answer is always yes.

Excerpted from Send Me Into the Woods Alone,by Erin Pepler. Copyright © 2022, by Erin Pepler.Published by Invisible Publishing. Reproduced by arrangement with the Publisher. All rights reserved.