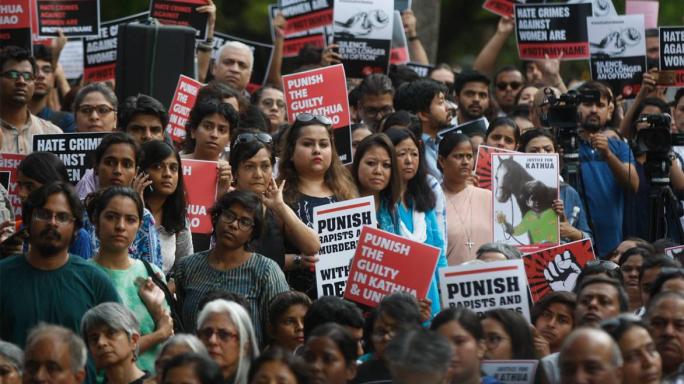 An eight-year-old girl from the nomadic Bakarwal community goes missing from her home in Kathua in January. Investigations reveal that she was kidnapped, confined, sedated and raped repeatedly by a juvenile and three men of varying ages.  The charge sheet filed by the police details shocking injuries to her body, along with the accounts of torture and rape, where the men took turns to violate her repeatedly over five days, under the eye of their elders and policemen.

They hid her in a Devisthan, run by the main accused, and put her through a cycle of violence, performing rituals in between. They shoved sedatives down her delicate mouth, raping and tattering her—apparently entertainment for the menfolk of an entire family—before killing her. But no, they kept her alive for a few more rounds of sexual assault, until it was no longer possible to abuse her small, smothered body. As they readied to snuff out the remains of her life from her broken body, the accused police officer asked for one round of rape before they finally killed and threw her body in the jungle.

You’d think it isn’t possible for this to get any worse. But it did. The Hindu Ekta Manch defended the accused, protested and tried to prevent the charge sheet from being filed, beat up and threatened those seeking justice. This included ministers and other stalwarts of Jammu.

Of course, the entire country erupted in protests. But through it all, news of multiple rape and violence cases against women and girl children continued to pour in: Unnao, Surat, Nagaon, Barmer … The Nirbhaya case had sent out shockwaves across India. Amid widespread outrage the accused were brought to book and a new law was framed—but the downward spiral continued. Inevitably, the narrative changes and we move on. What have we become?

Anuradha Roy writes a moving response, lest we forget. Listening to the voices of sanity of all the people who had gathered in protest and solidarity, particularly from school and college students at Delhi’s Jantar Mantar, it was impossible to hold back tears. Tears of despair and of hope—that they will bring in change. We can’t let them down.